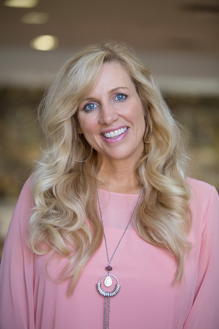 Deanne holds a master’s degree in communication from Pepperdine University. She completed her undergraduate work at the University of Delaware. The takeaway is that she chooses schools with mascots that aren’t very intimidating, like “Waves” and “Fighting Blue Hens.”

She’s held lots of jobs with little importance at very impressive places. In grad school, she interned at the “Tonight Show with Jay Leno,” eventually working her way up to Production Assistant, which isn’t really that high up at all. She became quite skilled in running errands, like delivering gift baskets to Garth Brooks or picking up strawberry Hubba Bubba gum for Cindy Crawford.

In her free time, Deanne enjoys backpacking Europe, road-tripping the United States, eating cheese and writing bios in the third person. She loves a good story. She hates crumpled up aluminum foil.

While Deanne is known to have a short attention span for most things, she’s never wavered in her passion for teaching at the college level –  something she’s done for more than 15 years at UCF and Valencia. She’s currently an instructor for SPC1608 (Public Speaking), SPC1017 (Interpersonal Communication) and PUR3100 (Public Relations Writing). She feels a particular calling to make boring people more interesting.