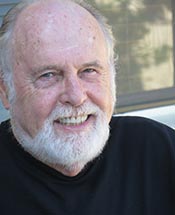 Professor Jones is an independent film producer, writer and director. He produced and directed feature films including Carry It On before joining the UCF faculty as a teacher of film production. Carry It On, a feature length documentary starring the folk singer, Joan Baez, was released in theaters world-wide.

During the Civil Rights Movement of the sixties, Professor Jones taught filmmaking workshops in the South, under the auspices of Operation Head Start and produced the film Della. During the Vietnam War, he worked closely with the Resistance, an anti-war group advocating draft resistance.

Professor Jones produced and directed a short film (Mid-Life Crisis) and a feature (Hollywood Capri) which utilized more than fifty UCF film students working side by side with professionals. Hollywood Capri was featured at the 2000 AngelCiti Film Festival and the 2000 New York International Independent Film/Video Festival.

From 1998 to 2000, Professor Jones produced “Dodge University: The Movie,” a feature about daily life in a film school directed by UCF film students.

In 2004, his feature comedy, Fetus Fetish, won Best Experimental Film in the New York International Independent Film Festival. Professor Jones is currently producing a series of short documentary films on the war in Iraq. The first film, American Soldier, 2008, was screened world-wide as part of the United Nations Film Festival. Since then he has produced, Witness, Requiem, The War Comes Home and Unknown Soldier; all have been screened at film festivals.

Professor Jones serves as the Coordinator for the UCF/UCLA Summer Internship Program in Los Angeles which he initiated in 2000.