Jack of the Lantern: A history and fable

Every October, carved pumpkins appear on porches and doorsteps around the world, and especially here in the United States. The practice of decorating gourd-like fruits with ghoulish faces (and sometimes jolly faces for the little ones) has been a long celebrated event; some even feel the Halloween season has not properly been celebrated without the carving of a pumpkin. But where did this tradition begin? In light of the date, October 24, just days before Halloween (but still with time to get your own pumpkin) I will share the tale of the Jack O’Lantern with you.

The legend began in Ireland with the tale of a man named “Stingy Jack.” According to the story, Jack invited the Devil to have a drink with him and, true to his name, Jack did not want to pay for his drink. He convinced the Devil to turn himself into a coin in order to pay for the drinks. However, once the Devil had thus turned himself into a coin, Jack kept the coin for himself, placing it in his pocket next to a silver cross which prevented the Devil from changing back to his original form. Eventually, Jack freed the Devil under the condition that the Devil should leave Jack alone for one year and should Jack die during that year, the Devil would agree not to claim his soul. The next year the Devil again returned to Jack, but Jack was clever and tricked him again. Jack asked the Devil for a fruit, once the Devil had climbed into the tree, Jack carved a cross into the bark at the base of the tree, preventing the Devil from climbing back down. Jack made the Devil agree to leave him alone for ten more years.

Now the story says, that Jack died not long after his last encounter with the Devil, and as the legend goes, God would not allow such an unsavory figure into heaven. The Devil, still upset from the tricks Jack had played on him and keeping to his word would not allow Jack into hell. He sent Jack off with only a single burning coal to light his way. Jack placed the coal into a carved out turnip and has been roaming the Earth ever since.

The Irish refer to his as “Jack of the Lantern” and then, later “Jack O’Lantern.” In Ireland and Scotlang, people began to carve their own Jack O’Lanterns with scary faces into turnips, potatoes and beets and place them into windows and near doors to frighten away Stingy Jack and other wandering evil spirits. Immigrants from these countries brought the tradition to the United States with them and soon found that pumpkins made perfect Jack O’Lanterns. 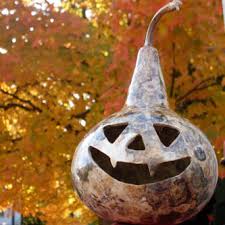 For a short film on the history of pumpkin carving, and other Halloween related videos, see this link:

A second opinion on the origin of the name Jack O’Lantern comes from the origin of the word itself. In Medieval Latin, ignis fatuus means Foolish Fire, and is the same name used to refer to the strange glowing light which luminates the will-o’-the-wisp common to the bogs, swamps and marshes native to Ireland. It resembles a flickering lamp and is said to recede if approached, drawing travellers from the safe paths. These lanterns have also gained the names hinkypunk and hobby lantern in the old English countryside.

Another tale related to the Jack o’Lantern is that of the Headless Horseman. Stories of the Headless Horseman have been told all around the world, in Bavarian folklore, from the German Grimm’s Fairy Tales, the Dutch and even in India (they call him the Dund). However, the best known version is that as told by Washington Irving in his 1820 story, The Legend of Sleepy Hollow. For a full history of the story of the Headless Horseman, read Things In The Basement: A History of Halloween Horrors by John Lloyd Retzer. Whatever the origin of the name, or the story you associate with, the Jack O’Lantern has become a much loved tradition. There’s still time to get yours carved before All-Hollows Eve lest Stingy Jack or some other evil spirit should come knocking on your door.