Beautiful. Creepy. Abandoned. Locations around the world with gritty histories to inspire your nightmares and dreams. Stroll down their decrepit halls, peruse their forgotten homes and remember to watch your step as your mind wanders…

April 26, 1986, the Chernobyl reactor began its tragic meltdown. A huge blow to the nuclear energy platform as well as hundreds of families, and today still stands the town of Pripyat, a shell of it former self, a city frozen in a 1980’s Soviet time-warp. While the reactor currently resides in a sarcophagus, the area remains unsafe for human life. However, the area has thrived in one aspect, wildlife has returned to the area in droves; wolves silently hunt among the towering apartment buildings, boars forge in the abandoned amusement park – which strangely enough opened the day after the reactor blew in the midst of evacuation. What a view the city must have been from the top of the ferris wheel then.. 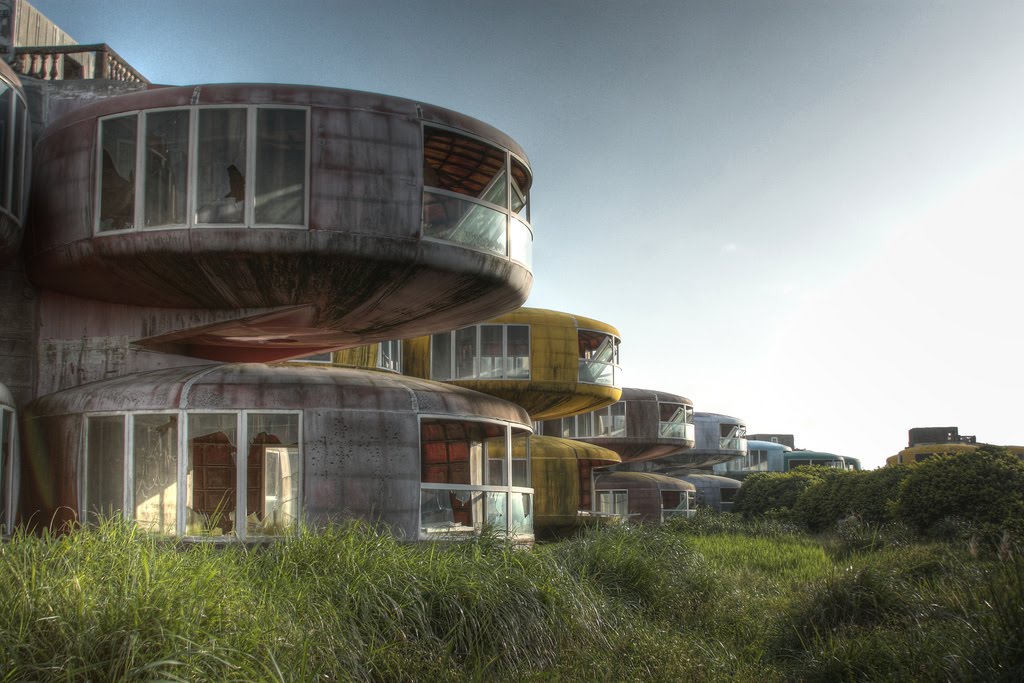 Originally intended as a vacation resort catering to U.S. servicemen north of Taipei, the architecture could be called UFO futuristic chic but this location had difficulties from the beginning. During construction, many workers perished in freak accidents, many attributed to supernatural causes. Some speculate that the resort was constructed on a Dutch burial ground while others attribute it to a dragon statue destroyed during construction. Either way, the ruins never took in their first guest.

Once a successful diamond mining community, Kolmanskop is now a deserted ghost land which welcomes only sand. The desert city was constructed when the Germans discovered great mineral wealth in the region. In much the German style, the city was constructed with a ballroom, a theatre, and the first tram system in Africa. Since the miners moved on, the town has been claimed by no one but the sands, covering the streets, filling the hourses and erasing most signs of civilization left. All that remains visible are the towering homes and public buildings. The sight of this decayed German town amongst the shifting sands of the Namib desert is anachonistically delightful. The Mitsubishi company built this remote island civilization during the industrial revolution around large coal deposits found in the Nagasaki islands. The island was home to some of Japan’s fist high rise concrete buildings, and for almost a century the island thrived with life. At its peak, the 15 acre island housed over five thousand residents – coal miners and their families – and today boasts being the most densely populated area in modern history. The island maintains a post-apocalyptic industrial vibe which you are welcome to visit as of 2009 when the island became open to tourists; you may visit the abandoned movie theaters, apartment towers and shops which once were home to the black-lunged miners of this little distant island.

During World War II, the Nasi troops fell upon this town, completely destroying the village and murdering 642 residents. The burned cars and charred remains of the city stand frozen in time as they did in 1944, a reflection of the monstrosity that befell this place and a memorial to the villagers who lost their lives. You are welcome to visit to pay your respects, but all visitors to the “martyr village” are asked to remain silent while wandering its melancholy streets.

The entire city of Centralia is condemned and its zip code has been revoked by the state of Pennsylvania. The road that once led into town is blocked off. It is though the city never existed, but it does, and has been on fire for more the fifty years. In 1962, a fire broke out in the landfill near the Odd Fellows cemetery just outside town. The fire quickly spread through a hole to the coal mine beneath the city and the fires have been burning ever since. Smoke bellows through open cracks in the road, the air smells of sulfur and the ground randomly opens releasing thousand degree heat and dangerous vapors into the air. The city has been slowly evacuated over the years, though some residents have chosen to stay behind, some believing that the evacuation is a conspiracy plot by the state to obtain their mineral rights to the anthracite coal reserves below their homes slowly burning away, some simply refusing to leave their homes.

Abandoned since: Still occupied by 10 or so brave souls During World War II, the British Royal Navy constructed a series of sea forts for an advanced defense line against inbound air raids and potential sea invasions from the Axis powers. The Maunsell forts still stand today, one however is still inhabited and is now a nation of its own referred to as the Principality of Sealand. These forts are a favorite for maritime explorers.

Abandoned since: One still inhabited In a bay on the northern shores of the Black Sea, the Soviet army maintained an elaborate submarine base throughout the Cold War. During the war, Soviet submarines were constructed elsewhere and transported here by rail for deployment into the Black Sea for cover operations. The tunnels of the base reach far and deep into the mountain above, providing room for many submarines and their crew up through the end of the war. Now a museum, you are welcome to visit. 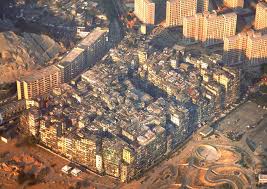 A loophole, a glitch never meant to exist born of dissent between two nations, Britain and Japan. This city rose on 7 acres housing more than 100,000 people so densely packed the lower floors never received sunlight. The people build one floor upon the next higher and higher into the sky, creating a myriad of tunnels, a living labyrinth. The Triads forced from Hong Kong take refuge here and soon take over the ramshackle society. Unregistered dentists and doctors, an opium den the next floor up and a cocaine parlour just past that, casinos, food parlours serving dog meat and secret factories are just a few of the lengthy list of services which can be acquired at this dismal modern dystopian city.

Abandoned since: Deconstructed in 1993

Called “the perfect place to die,” the Aokigahara forest holds the boast to world’s second most popular place to take one’s life. (The Golden Gate Bridge holds first place.) Since the 1950s, Japanese businessmen have wandered in, and over 500 have not wandered out. At the increasing rate of 10 – 30 per year, and recently, in 2002, some recorded 78 suicides have occurred in this location. Japanese spiritualists believe the blood of the dead has permeated the trees, generating paranormal activity and preventing many who enter from escaping the forest’s depths. Due to the vastness of the forest, you are unlikely to encounter other visitors to this location once inside the “Sea of Trees” so the police have mounted signs throughout reading “Your life is a precious gift from your parents,” and “Please consult the police before you decide to die!”Locals claim to be able to easily spot the three types of visitors to the forest: trekkers interested in scenic vistas of Mount Fuji, the curious hoping for a glimpse of the macabre, and those souls who do not plan on returning.

Abandoned since: Remains in use