Death of the Family Pet

Posted on April 9, 2009 by elizabeth hannigan

My mom got our cat Bandit 17 years ago when she was a kitten. She was a Christmas present from my dad to my mom when we were living in Los Angeles, California. She was a half Calico and half Persian cat. It was the 1st animal I was not afraid of as a kid. As the years passed Bandit and I grew up together.  Whe I was little Bandit didn’t like me because I always picked her up or scare her and she didn’t like that. Bandit would always sit in my mom’s lap and let my mom pet her, it was rare for Bandit to get in my lap. Mom told me that Bandit would come to me if I was nice to her and as I grew up Bandit started to come to me more. Even at 18 years old Bandit still acted like a kitten half of the time. The other part of the time she really started to show her age.  Slept all the time, stopped eating solid cat food, (we had to switch her to wet food, because she could not keep dry food down) and she started looking ratty. 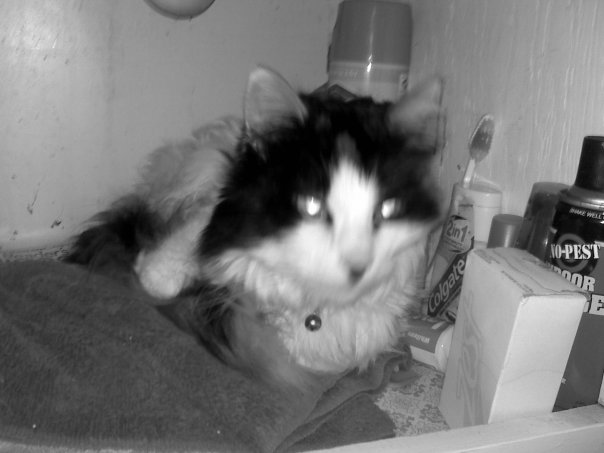 Bandit died a few months ago.  My Mom called me on a Saturday morning and told me that Bandit had a stroke on Friday night. Mom came home Friday night and found Bandit laying in her basket, and she knew something was wrong. Mom and Dad took Bandit to an emergency vet clinic after midnight and the vet told my Mom that Bandit had a stroke that night. The stroke had made Bandit blind and stiff, the vet and the vet said that they could do nothing else for Bandit. Mom told the vet to put Bandit to sleep because she didn’t want Bandit to suffer. Bandit was cremated and all we kept of Bandit was her collar. I felt as if one of my sisters had died because Bandit was one of the family and now she is gone.

May You Rest In Peace Bandit.

Know that You Missed and Loved Everyday.