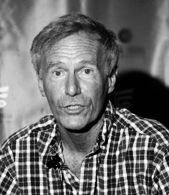 With a BA and MFA from UCLA Film School, Barry Sandler has written screenplays for numerous motion pictures, including CRIMES OF PASSION, THE MIRROR CRACK’D, EVIL UNDER THE SUN, THE DUCHESS AND THE DIRTWATER FOX, THE OTHER SIDE OF MIDNIGHT, GABLE AND LOMBARD, ALL-AMERICAN MURDER, THE LONERS, THE VALLEY, EVIL NEVER DIES, THE KANSAS CITY BOMBER, and the groundbreaking classic MAKING LOVE, the first major studio film to present a positive portrayal of gay and lesbian men and women.

Sandler has also written FUTURE HOUSE for Warner Bros., BRAINWAVE and LOVELAND for Universal, THE COMMON MANN for Columbia, TORCH for CBS, HOLLYWOOD HUSBANDS for NBC, and STAR LADIES, ACTRESS and STAT for ABC. In 2010 he was published in LARGER THAN LIFE: MOVIE STARS OF THE 1950’S, a collection of essays.

Sandler is the recipient of the GLAAD Media Award, the Southern California Psychotherapy Association Courage in Filmmaking Award, the People for the American Way Defending Freedom Citation, the PFLAG Oscar Wilde Award, the MECLA Humanitarian Award, the GLCSC Award, the FMPTA Crystal Reel Award, and the Outfest 2002 Gay Pioneer Award for Courage and Artistry.  He has been honored by the Berlin, Seattle, Florida, Asheville, Santa Barbara, Outfest, Gay Orlando and Q2 Film Festivals, profiled in the New York Times, the Los Angeles Times, the Advocate, the Orlando Sentinel, the Orlando Weekly, the Miami Herald, the Chicago Sun Times, After Dark, Daily Variety, Esquire Magazine, GQ, the Village Voice, Filmmakers Forum, ABC 20/20, NBC Today Show, A&E Biography, CBC Saturday Night, WHO’S WHO IN AMERICA, MAKING HISTORY by Eric Marcus, and The Celluloid Closet by Vito Russo, and he served as a commentator in Rob Epstein and Jeffrey Friedman’s award-winning documentary THE CELLULOID CLOSET.  In 2002, Sandler was named by The Advocate as one of the most influential gay artists in America.

He currently has film projects in development at Wildcat Productions, Rapid Heart Pictures, and Safe Harbour Films, and is mounting a stage adaptation of CRIMES OF PASSION, which premiered at the Edinburgh Festival in 2010.  In addition, he serves on the WGA Credit Arbitration Committee, the WGA Policy Review Board,  the American Cinemateque Advisory Board, and the Academy of Motion Picture Arts and Sciences, as well as being Artistic Director of the Outfest Screenwriting Lab and advisor to the Orlando Gay and Lesbian Center.

Since 2003, Sandler has been on the faculty of the University of Central Florida, where he teaches screenwriting and film history in the Film Program of the School of Visual Arts and Design.  He was the inaugural instructor in the UCF Honors College LGBT program.  In 2007, Sandler was selected as one of the WGA Gay Groundbreakers. In 2008, he was chosen as an honorary guest speaker at California State University, Northridge. In 2009, he was honored with a week-long tribute and retrospective of his work by the University of Nebraska, and in 2010 he was honored by the Florida Queer Arts Council with a commemoration of his contribution to advancing the positive images of gay and lesbian people through his work.  In 2011 Sandler was honored by the Orlando Gay and Lesbian Center with a month-long tribute and commemoration of his work and a celebration of his historic film MAKING LOVE, and in 2012 the Chelsea Arts Center in New York honored his transgressive classic CRIMES OF PASSION.

In 2012, Outfest presented a 30th anniversary commemorative screening of MAKING LOVE in conjunction with the 30th anniversary of Outfest.  In 2013, the Lavender Effect, in conjunction with the One Institute, presented “Making Love Letters”, a benefit performance for LE consisting of prominent actors reading letters Sandler received from hundreds of young LGBT men and women around the country who were profoundly affected by the film.

In July 2014, Outfest presented a special 30th anniversary screening of Sandler’s classic film CRIMES OF PASSION, directed by legendary filmmaker Ken Russell, followed by a panel reuniting cast and crew members from the film. In October 2014, the Montreal International Festival du Nouveau Cinema presented another 30th anniversary showing of the film, and in February 2015, the Spectacle Cinema in Brooklyn presented a month-long tribute to the film.

In 2015, Sandler wrote and produced KNOCK ‘EM DEAD, a raunchy comedy/mystery satire of Hollywood, starring an all-African-American cast.  The film was noteworthy for casting an entire cast of African-American actors in roles not written or intended for any specific race. It was released in theaters worldwide by EOne, followed by release on VOD, DVD and Netflix.  In July 2016, Arrow released a special Blu-Ray edition of CRIMES OF PASSION, for which Sandler did an extensive video interview that appears on the Blu-Ray,  discussing his career as screenwriter and producer.