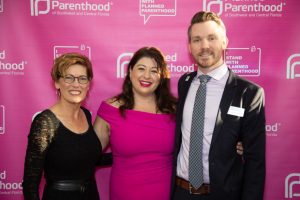 Boyd Lindsley, Ed.D., the senior associate director for the Nicholson School, has worked for the university since 2007, but many may not be familiar with the work he does outside of campus.

Lindsley is now making headlines as the first openly gay man to be elected as chair of Planned Parenthood of Southwest and Central Florida’s board of directors. His main tasks for the organization include fiduciary responsibility, governance and fundraising.

“It made sense for us to have a board chair in Orlando because we cover 22 counties, from Brevard county to Collier county,” Lindsley said. “Right now, we have a substantial need for our services, for our health care, so we’re working toward expanding health centers [in Central Florida].”

With his new position, Lindsley now has more of a leadership role within the organization. He thinks the best leaders, are servant leaders.

“I believe in the notion strongly that those who lead well really provide a service to people,” Lindsley explained. “If we can lead groups and organizations successfully, we’re empowering those within the organization to become vested in the process so they can advance the mission and it’s not just the leader doing it. That allows for people to come to consensus and advance the organization’s mission.”

“[Planned Parenthood] is a wonderful organization that provides excellent health care; non-judgmental health care,” Lindsley said. “No matter who you are, who you love, that doesn’t matter to us, we will provide health care for you if you need it.”

PPSWCF, an affiliate of the Planned Parenthood Federation of America, Inc. began operations in 1966. Since then, their approach to health and well-being is based on respect for each individual’s right to make informed, independent decisions about health, reproduction and family planning.

The organization includes various amenities such as sexually transmitted infection (STI) testing, family planning services, contraception and lifesaving screenings for cervical, breast and testicular cancer. PPSWCF also provides hormone replacement therapy (HRT) for those going through menopause and gender affirming therapy for those in the transgender community who seek such services; however, this service is not yet provided universally across all Planned Parenthood affiliates – it has only been a part of the Southwest and Central Florida affiliate for the last three years.

To see a full-list and learn more about the vital services they provide, click here.

Although PPSWCF tends to be more well-known for their work with female reproductive services, they offer important health care services for everyone.

“We have been serving more than 800 transgender individuals since we started our program,” Lindsley said. “Those folks are coming from all over Florida, as well as from 10 other states in our nation, showing how badly the need is for this kind of health care.”

While it is apparent that many people are in need of these services, funds that make family planning and other preventive health services more affordable and accessible have recently been made scarce.

The Trump administration issued prohibitions on health clinics receiving certain federal funding if they provide abortions or if they refer patients to other health centers where they can receive abortions. Due to these prohibitions, the funds, known as Title X funding, have had to be collected from elsewhere.

“Because the state of which we live in, we have not had Title X funds for a number of years,” said Lindsley. “As Planned Parenthood, we have had to raise funds to provide the kind of care that is needed for family planning services. That is what Title X funds supports – family planning, never abortion. So, we’ve had to supplement that through fundraising.”

PPSWCF now holds fundraisers throughout the year to compensate for their decreased funding.

The next upcoming fundraiser in Orlando will be on November 6. The event is called Rosé for Reproductive Rights, which will be a beer and wine tasting mixer held at the Orlando Museum of Art.

There will also be an annual benefit dinner at the Alfond Inn in Orlando on April 24.