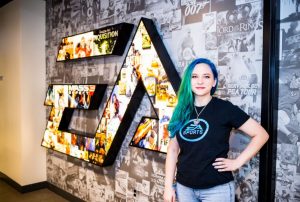 “Story is king,” Karen McCarthy ’13 said with emphasis when asked about how she approaches making a character.

The Florida Interactive Entertainment Academy (FIEA) alumna and current character artist at Electronic Arts’ Tiburon Studio has worked on EA SPORTS Madden NFL, NBA Live and Rory McIlroy PGA Tour. And before she sculpts the first pixel, she thinks about the small details that will reveal a character’s backstory.

“I got the opportunity to make Stretch Monroe for NBA Live,” McCarthy said. “He was a character on NBA Street and so he was a bit older. So I gave him some sunspots and I was thinking he probably even has a scar in his eyebrow and I really thought about what he’s been doing all this time. And all those little things can add up quickly to help breathe life into a character.”

McCarthy’s job has her meeting some of the greatest athletes in the world when she goes on “scan trips” where she uses a process called “photogrammetry” to get a 360-degree view of a person or team. She’ll then take those reference shots to start building the character, with special emphasis on the eyes.

“Eyes, nose and mouth. If you can’t get that right then a person is not recognizable,” McCarthy said. “The ear could be off, and someone’s not going to know, ‘OK, that’s not [NFL players] Ed Reed’s or Ray Lewis’ ear.’ But if the eyes aren’t there, then they’re not there.”

One of her favorite work trips was hanging out with the USA Basketball Women’s National Team. That experience fed her desire to see more women in video games as well as developing games. In 2016, when the opportunity to work on incorporating the WNBA players into NBA Live arose, McCarthy jumped at it.

“So when we were told they wanted to do that, I just thought, we have to do this right, and we’ve got to do it now.” Now, players can choose WNBA stars like Sue Bird as their character as well as their male NBA counterparts.

McCarthy’s efforts led her to win the Inspiration “Sharkie” award, one of the highest employee recognitions at EA Tiburon.

She said it’s a really important time to be a woman in the game industry and that attitudes are changing, both at EA and in the industry in general. This year she got to participate in the Press Play Conference (sponsored by EA and FIEA) and a “Get in the Game” STEAM Camp held at the studio. Both events aimed at getting more girls and women interested in video games.

“I think the entertainment industry as a whole has just seen that focusing on inclusivity, and diversity – especially women and female representation – is not only good for business, but good for work environments as well,” McCarthy said.

McCarthy published her prolific personal work on sites like Artstation and Sketchfab and has been getting compliments from the digital art community all over the world. For her, it’s all about keeping her skills current.

“It’s a really exciting industry because it’s not stale,” said McCarthy. “A game comes out and they’ve broken some sort of barrier or they did something really amazing. Now you want to do that so it’s always trying to strive for the next best thing.”