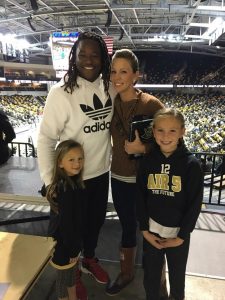 Lori Levoy is UCF’s self-proclaimed biggest fan. She graduated from the Nicholson School of Communication in 2001 with a bachelor’s degree in communication. A former UCF student athlete, Levoy has maintained her love for UCF for more than 15 years. In 2017, during UCF’s perfect football season, that love motivated her to write and publish her own children’s book, “I Am Going to be a UCF Knight.”

“I think UCF is the most amazing school in the country,” said Levoy. “I ran cross-country and track at UCF and wanted to share my love for my university. When I had children of my own, I wanted to read to them about the school I love. There was no UCF children’s book, so I wrote one.”

Although Levoy had the rough draft for several years, the book was published in September 2017, at the start of UCF’s undefeated football season. She reached out to her former professor Michelle Dusseau and said she wanted to publish it. With Dusseau’s encouragement, Levoy contacted Mascot Books, and the rest is (UCF) history.

“Lori is an example of someone who not only understands, but embodies the UCF creed,” said Dusseau, who is an instructor of human communication. “As a student, she was as dedicated to the success of others as she was to herself. Lori has always been proud to be a UCF Knight and spreads that pride through her positive actions. Her message to the next generation of scholars isn’t just to enroll at UCF; it’s also to embrace the diverse opportunities UCF will bring to their lives.”

The book features illustrations by Ron Florendo, a freelance illustrator and comic artist; each illustration is of a photo handpicked by Levoy. The cover illustration is from the front page of the Orlando Sentinel, when former UCF Knight Javier Beorlegui kicked the game-winning field goal against Alabama in 2000. Currently a special education teacher, Levoy was more than happy to watch the undefeated Knights football team this past season.

“This past football season was something to witness,” said Levoy. “UCF is much different from any other university in Florida. When I committed to UCF, I did not inherit a dynasty of winning. UCF’s 13-0 season was fought for and won. To see what these athletes have been able to accomplish is nothing short of amazing.”

“I Am Going to be a UCF Knight” is available online at Amazon and Barnes and Noble.