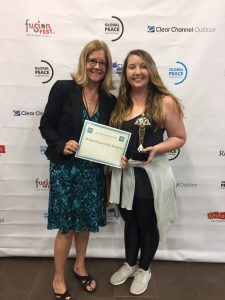 *Disclaimer: DACA recipient’s last name is not mentioned due to protective reasons

In fall of 2017, Nicholson School of Communication and Media alumna Brittany Todd took a documentary class that challenged her knowledge about making films. Todd put in hours refining her craft and it paid off. Todd entered her first film festival in September 2018 and won the Audience Award.

“I find working on documentaries interesting because I can help other people tell their stories,” Todd said. “They can be just as heartbreaking as a fictional film and sometimes more because you know it happened in real life.”

Todd decided to take a documentary class in 2017 taught by Lisa Mills, associate professor of film. Todd was seeking a bachelor’s degree in film and the documentary class was the first challenging class for her. She was in her junior year and she didn’t know much about editing so she had trouble at first.

As the class progressed, Todd learned how to edit and produce. In that same semester, she was helping students at Rollins College to produce a movie about Deferred Action for Childhood Arrivals (DACA) recipients. DACA is an American immigration policy that allows individuals brought to the United States illegally as children to receive a renewable two-year period of deferred action from deportation and become eligible for a work permit.

While working on the film, Todd met Astrid, a DACA recipient from Honduras who was seeking an undergraduate degree at Rollins.

Todd had the idea to make a film about Astrid for her documentary class. Todd knew that Astrid’s story was special and needed to be told. Todd wanted to send a message and change an often negative perception about undocumented people.

“The media has painted an unflattering portrait of undocumented people, so I wanted to help change that picture with Astrid’s help,” Todd said.

Todd shot the film and it was a success in Mills’ documentary class. Even though the film was finished, Todd wanted to reshoot the whole interview because she felt it was missing content. She asked Mills if she could reshoot the film and the professor was onboard.

Astrid’s  hour long interview had to cut it down to six minutes.

“It was hard to cut it down because there were so many parts of her story that were so interesting and beautiful and very inspiring,” Todd said.

Todd wanted the audience to see photos or videos of Honduras, but she had a hard time finding it. She searched through archives and there was nothing. All that Todd could find were videos of tourists’ websites, but she wanted footage of the real Honduras. Todd wanted to show what Astrid experienced in Honduras and why she felt she had to leave.

Astrid didn’t have any videos of her family and only had a small number of photos of her time in Honduras. It was difficult for Todd to find content, but she made it work with the photos and videos she had. After a year “Astrid, the Human” was finished.

She named the film, “Astrid, the Human,” as her way of humanizing undocumented people in ways she felt was not common in most media.

Todd showed her finished film in spring 2018 at UCF and her friends encouraged her to enter the Global Peace Film Festival. Todd’s film was picked to be a part of the festival.

Todd’s film won first place among 17 films highlighting the stories of immigrants who have made Central Florida their home.

“I was very shocked that I won,” Todd said.

Todd won the audience award. She didn’t expect to win because she only had a few people supporting her and the other films had more people

“I felt that her film was really special,” Mills said. “It hit the mark that the festival was looking for in terms of highlighting an individual who had come to this county and had a story to tell,” Mills said.

“I think her film stood out because Brittany did a good job focusing on the main character and what made her story as a DACA recipient so compelling,” Mills said.