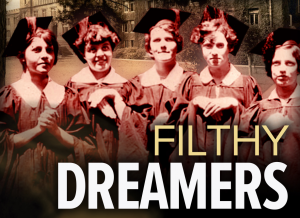 The Ogeechee International History Film Festival is the only open submission, juried, international cinema program of its kind.

In the past, festivals devoted to history films have been located solely in Europe. Now in its fourth season, the Ogeechee International History Film Festival is the longest-running such festival in the world. Receiving an award from them is a huge honor.

“Filthy Dreamers,” focuses on efforts to restrict the academic freedom of female students at the Florida State College for Women in the late 1920s.

The religious fundamentalist who started the classroom debacle proclaimed that material on evolution was “corrupting young women’s minds” and called students “filthy dreamers.” Lawmakers and religious activists sought to ban textbooks and classes on evolution.

During that time, the Florida State Women’s College was the only public university that allowed white women to enroll and found itself in the midst of an ideological battle as religious activists tried to control what was taught in the classroom.

Mills is an associate professor of film at UCF who teaches documentary production. She holds her B.A. in English from Jacksonville University, her M.A. in Mass Communication from UCF and her Ph.D. in Political Communication from the University of Florida. Her films have won numerous national and international awards and have screened in festivals all over the world.

Cassanello is an associate professor of history at UCF and a publicly engaged scholar. He has curated exhibits such as “The Long History of the Civil Rights Movement in Florida” and “From Kin to Kant: Turpentine Culture in Central Florida.” He has also produced numerous media projects such as the films “Filthy Dreamers” and “The Committee” with Mills.

“My goal is to make artistic choices that will help others understand the souls and settings in my films,” Mills said. “I want my work to dramatize conscious and unconscious truths of the human experience.”

Along with receiving the 2020 Ogeechee International History Film Festival’s Best Student Film Award, the film is also a College Television Emmy award winning documentary and has received an honorable mention from the Broadcast Education Association’s Festival of Media Arts.

“Filthy Dreamers,” was additionally the first UCF film ever nominated for a College Emmy and went up against entries from Chapman University in Orange, California and Northwestern University in Evanston, Illinois.

The documentary is now airing on public television stations across Florida, presented by WUCF-TV.

To view a trailer of the film, click here.