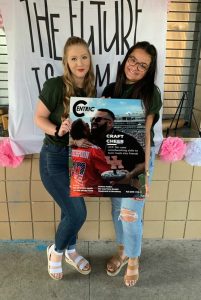 Centric magazine is all about the students — created by students about students for students.

The magazine is produced as a project of the JOU 4447 Magazine Editing & Production course, offered for students every fall since 2011 and led by professor Rick Brunson.

Each issue beautifully spotlights inspiring and innovative Knights who are making an impact on their community.

In the newest issue, editor-in-chief Medina wrote, “My ultimate goal in life is to make history. This issue of Centric magazine accomplished just that with the smallest and first all-female staff. Ever.”

Medina had no idea walking into the class that she would be assigned the leading role of editor-in-chief, but instead of allowing fear to get the best of her, she focused on her eagerness to learn.

“I led all pitch meetings, edited all stories, helped with social media, assisted with magazine distribution and even wrote the cover story,” Medina said.

Medina knew she had some big shoes to fill, but she wasn’t alone — she had other versatile and dynamic classmates around her to help. Centric couldn’t have come together without the team all working so cohesively.

“The number one thing you need to be successful in this class is a sense of teamwork,” said journalism major Sikes, who was the digital editor for the fall 2019 semester. “Everyone has to work together, do their own share of work and, of course, communicate. This class is hard work, but it is also my favorite course that I have taken.”

For the class final, professor Brunson took the Centric staff to the editorial offices of Bonnier Corporation, which is one of the largest publishers of magazines in the country, with well-known titles including “Popular Science,’’ “Working Woman,’’ and “Outdoor Life,’’ amongst others.

“Bonnier’s Editor-in-Chief Mary Frances Emmons conducted a full-scale professional critique of the magazine and presented it to us,” said Brunson. “It was a rich learning opportunity for the students.”

Sikes notes the critique as one of the most meaningful experiences in her career.

“It was such a treat and such an honor to have our magazine critiqued at Bonnier,” said Sikes. “Bonnier publishes more than 40 special-interest magazines and is one of the largest publishing groups for special-interests in America. It was intimidating, but it was overall one of the biggest learning experiences in my journalism career.”

As an added bonus, Bonnier Senior Editor Andy Zunz, who is a Nicholson School journalism grad ‘14 and a former editor-in-chief of Centric, participated in the critique as well.

“It was quite gratifying to see one of your former students helping your current students to achieve success in a profession they aspire to join,” Brunson said.

Since Zunz had been part of the Centric staff before, he had a better understanding of the work that went into creating the student magazine.

“He was in our shoes at one point as a member of Centric, so he understood some of the struggles we had to overcome,” expressed Medina. “He said he really appreciated our hard work and gave us some great tips. I’ve learned so much about not only how to produce and publish a magazine, but how to become a better leader, editor and writer—things that I’ll take into any job in the future.”

Want to check out the latest issue of Centric? Pick up a physical copy in the Nicholson building on main campus or read any of the issues for free online now.