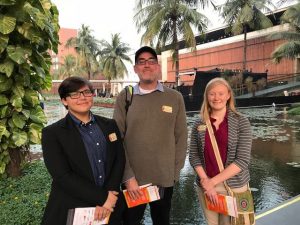 The weather in Orlando was chilly during the winter break, but the UCF Debate Team continued to heat up. Not only did the team compete at the Hurricane Debates hosted by the University of Miami in Coral Gables, Florida, some of the team also traveled to India and participated in Calcutta’s Festival of the Spoken Word 2017.

During the break, graduate student Lakelyn Taylor and sophomore Ariel Olsonaccompanied Nick Sciullo, J.D., Ph.D., to Kolkata, one of the largest cities in India. During one week, Taylor and Olson participated in debate activities with students from Cambridge, Oxford and Harvard Universities. They were also able to sample local cuisine, learn the city’s history and experience urban life in an Indian metropolis. The event was co-sponsored by the India Center at UCF, located in the Political Science Department in the College of Sciences.

“The India Center is very pleased to support once in a lifetime opportunities like this one, which introduce our undergraduate students to Indian culture,” said Kerstin Hamann, Ph.D., Pegasus Professor and Political Science Department chairperson.

Sciullo, who serves as John F. Butler director of debate, is excited that the team can have these amazing opportunities and gain exposure to different things.

“UCF Debate’s work in India connected our debaters with those from several countries,” said Sciullo. “We were ultimately connected to the network of civic engagement underlying deliberative dialogue and international democratic participation.”

Taylor and Olson had the opportunity to show their skills and network with debaters from around the world. Taylor was even highlighted in a magazine local to Kolkata.

The UCF Debate Team had quarter finalists, semifinalists and finalists in the Junior Varsity bracket.

In the Junior Varsity Division Finals round against Boston College, after a highly spirited and competitive debate by both teams, Uhlig & his partner came in 2nd place after a 3-0 decision for Boston College.

Most notably, in the Novice Division, the team of Ethan Smith and Christopher Gilliamachieved a pre-elimination record high enough for the two students to compete in Finals. They left the Hurricane Debates as the tournament’s 1st place team against their opponents from the United States Naval Academy. This is the first tournament for Gilliam, and the first elimination round and tournament victory for both debaters.

This was only the first tournament of the spring semester. The UCF Debate Team is now setting its sights on the James Madison University College Invitational in Harrisonburg, Virginia.

NSC Director Robert Littlefield, Ph.D., is more than proud of all that the debate team has accomplished.

“The good news keeps us moving up, and up, and up!” said Littlefield. “We are so pleased that NSC students continue to excel.”