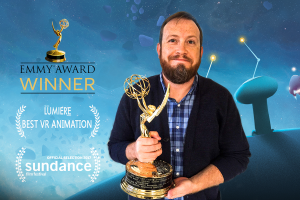 What did you win a Daytime Emmy for?
The category we (his company Baobab Studios) won for was “Outstanding Interactive Media”—Original Daytime Program or Series.
What did you think when you won it?
Of course, I was thrilled! We’re actually two for two now. Baobab won the previous year, in the same category, for “Invasion!”

How was the story created?
Coming off Baobab’s initial success on “Invasion!”, the team had a couple goals. First, to further explore the characters of the story’s bumbling aliens (who are called Mac & Cheez). Second, to give the user more of a role to play in the story. The pipeline we use is part feature film, part video game, and part just doing what we think will work (because there are no turnkey development solutions for virtual reality interactive short-form narratives).

How is telling a story in VR different?
First, the increasingly interactive natures of our stories present brilliant challenges. There is a seeming, but not insurmountable, conflict between the role of the storyteller and the agency of the user. We still don’t have all the answers to that, but Ron [FIEA professor Ron Weaver] teaches one of them: “Yes, and.”
Second, and you don’t really understand this until you first put on a headset, but the sense of presence in a virtual environment can be overwhelming. If you’re not careful, you end up developing content that users completely miss because, while you’re trying to tell a story, they’re distracted just being in the environment. Making sure the user feels connected to and engaged with our characters is one way we design against that.

What did you use to lead the viewer through the story/VR space?
Some of the same tools a designer would use in a game engine: lighting, visual effects, motion, sound — elements that either draw or keep the attention of the user. Eye contact is particularly powerful. There’s something magical and engaging about the simple act of having a character look at you.

How did FIEA help you get to this point in your career?
Besides the obvious experience and education, I gained at FIEA, the program also got me my internship at Zynga. That’s where I met Maureen Fan, now Baobab’s CEO, who I worked for on FarmVille 2.

Where do you keep the trophy?
My wife jokes that we don’t have a proper place for such a fancy award. Currently, it sits on an end table by our couch—next to Alexa and my PS4 controller.

Did you get to go to the awards ceremony?
No, we’re a small scrappy studio. Most of the team was already heads down on the production of our next piece, “Crow: The Legend” (which launches to consumers this fall), by the time we won. No rest for the start-up!
Saturday Night Live has 50 wins and 231 nominations. When do you think you’ll catch them?
Catching them on total nominations might take a while, but catching them on actual wins… yeah, it might take a while.