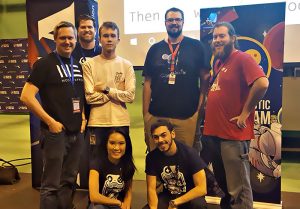 FIEA students Rafael Brochado and Denis Savosin love games. And they love space. And those two passions came together on October 1, 2017 as they created a game that took second place in the “2017 Indie Galactic Space Jam.”

They had help from five other participants who chipped in on audio and other tasks. The team won $666 for the 2nd place finish and beat out 19 other games.

Their game, called “Jigsaw Planets” uses virtual reality to teach players the order of the planets in our solar system and their orbits. As typical of a game jam format, the game had to be developed in 48 hours. Brochado was the project lead and Savosin was the programming lead.

“This was an idea I had bouncing around my head for a while,” Brochado said. “I wanted to marry the essence of the puzzle game mechanic with a space-related theme. Then one night, when Denis pitched me an idea he had for VR game, I told him how it would be cool to be able to ‘build the planets’ in VR.”

“Indie Galactic Space Jam” is a collaborative event dedicated to creating games about space travel and exploration. In its fourth year, it was held at several venues in Orlando.

Both students say they would like to improve the game in the future, hoping to turn it into a viable teaching tool. All they need is more time. And that continued passion for video games and space.