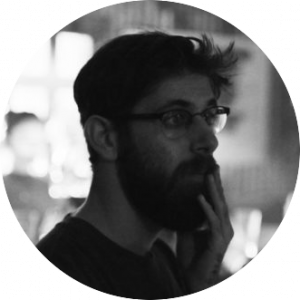 An Interview with Julian Baner

Dara: What was it like getting permission to shoot at the Carnival?

Julian: Working out locations was one of the most stressful aspects of producing this film (takes months!), but the carnival location in particular was the most difficult. We planned on shooting it in July, but pushed that to October at our location’s request (FunSpot USA), and then pushed it to December when they bailed completely in October. We rewrote the script to take place at another location just in case we couldn’t find another carnival by December. Luckily, we had been in communication with the folks who run a local seasonal fair (found their phone on their website) and it was very simple. They knew we were students so they didn’t charge us (I offered to shoot a promo vid for them, but that fell through) and they signed a location agreement and gave us pretty much total freedom so long as we kept a small footprint. Having a small crew (we had 15, but the lower the better) goes a long way in locations allowing you to shoot there.

Dara: If you did, when in the process did you copyright the IP of your film?

Julian: Never copyrighted my IP. Not too worried about it to be honest, but it’s best practice to do so once your script is completed.

Dara: How was it getting permission to play music?

Julian: The song that the rock band plays is original, but all of the other music I paid to license. You have to track down the publisher and record label and be prepared to spend up to $1,000 per song for the rights you need. There are some companies like Bank Robber, which I went through, that will act as a middleman between you and the

Dara: What was your budget for the film? What did most of the budget go into?

Julian: I think budget is nearing around $30,000. Most of that went to paying key crew members, insurance for driving scenes and scenes in/around bodies of water, locations, and music licensing. I attached my budget breakdown (slightly outdated, but the only things missing are more music licensing and marketing budget).

For the record, I would not recommend such a high budget, and think it would be better to write a script based on the resources (locations, props, etc.) that you ALREADY have access to, and keep it under $10,000 by having fewer days of shooting (maybe 14?) and less crew (max 10?).

Dara: Where did you find your cast and crew?

Julian: Cast was half just friends of mine (including the lead) and half found through casting sessions that we organized ourselves. Just put out a casting call on local acting Facebook groups and booked a classroom at UCF on the weekend to hold the auditions. Crew was all UCF film students/alumni. Just reached out individually to everyone or got references from other film students.

Dara: What insurance did you need for driving scenes and shots where the actor is underwater?

Julian: Both of these were extra insurance costs. The film department has its own insurance plan that you can use, but it does not cover certain things like driving, water scenes, stunts, falls, etc. Before you are greenlit to start production, you will have a meeting with some faculty to make sure you are either covered by the default insurance, or if you need to purchase extra. They will walk you through the process. For the record, each scene in which we were driving was an extra $1,000. Each water scene was an extra $300 if I remember correctly.

The following interview was conducted via email by Dara Anya on June 5-6, 2020.