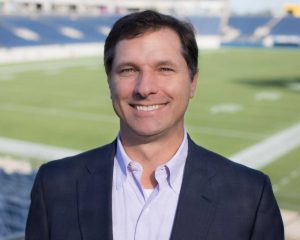 During 2017’s NFL Pro Bowl at Camping World Stadium in Orlando, Florida, Steve Hogan, UCF class of 1991, had a unique perspective of the game. From the sidelines, he watched as New Orleans Saints quarterback Drew Brees’ children played catch with Dallas Cowboys wide receiver Dez Bryant. National Football League (NFL) commissioner Roger Goodell hovered close enough to extend a handshake and a thank you. In the stands, 60,000 fans displayed their varied allegiances with NFL team jerseys of nearly every color.

Hogan, the CEO of Florida Citrus Sports, forced himself to take a breath and appreciate the final product of a lot of hard work before moving on to the next task. Whether handling community projects, college football bowl season, World Cup bids or the 2018 NFL Pro Bowl (again in Orlando), Hogan’s world has constantly been in motion since he joined the events department at Florida Citrus Sports in 1995.

And yet, Hogan, who has served as Florida Citrus Sports’ CEO since 2006, still wakes up every day excited to head to the same organization that he’s been dedicated to for the past 23 years.

“I just love the fact that Central Florida is constantly a community that has continued to push the boundaries and reinvent itself as it relates to sports,” he said. “As long as I’ve been here, I always feel like there’s been something new to work on. There’s a new challenge every year to be excited about.”

Hogan grew up in Central Florida and spent two years at Polk State College before transferring to UCF. Widely regarded as the “quarterback” who brought leaders from the public and private sectors to convince the NFL to move the Pro Bowl from Hawaii to Orlando, Hogan was actually a walk-on kicker for the UCF Knights football team while a student at UCF. A former journalism major, Hogan said UCF’s ability to provide a student experience in a metropolitan area seemed like the right fit for him.

“The class environment was fantastic, but so are the well-rounded nature of the community, campus and the culture for students,” Hogan said. “To me, it was everything that some schools can’t provide.”

Since graduating, Hogan has been recognized by the Orlando Business Journal as 2014 CEO of the Year and, among other awards, received the Central Florida Hotel & Lodging Association’s 2017 Charles Andrews Memorial Hospitality Award in recognition of his contributions to Central Florida’s hospitality industry and the community at large.

Hogan “beat the drum” for 10 years until the Pro Bowl was hosted in Orlando beginning in 2017. Another part of beating the drum included a more than $200 million commitment to improvements to Camping World Stadium – a project that Hogan worked tirelessly for alongside community leaders for nearly a decade to secure approval for the reconstruction. While the reconstruction has certainly helped land marquee events like this week’s Pro Bowl, part of the reconstruction opened the door to another passion project for Hogan: LIFT Orlando.

LIFT Orlando is a non-profit which allows business leaders and west-Orlando residents to break the cycle of poverty through neighborhood revitalization. Since 2013, under Hogan’s leadership, Florida Citrus Sports has committed to the cause by intending to use the Camping World Stadium as a positive economic engine. Increased profits from sponsorships and games are directed toward funding programs that benefit the neighboring children and families.

Additionally, two blocks from the stadium, LIFT Orlando’s $40-million mixed-income housing apartment building is set to open for new residents later this month. The project replaced a former crime-ridden, boarded up property that had been foreclosed for five years.

Hogan knows it will take decades to create the real change that LIFT Orlando has set out to achieve, but he is already starting to see impact take shape.

“We’re driven by the idea that there’s a different approach for social innovation,” Hogan said. “This is just the beginning. Five years ago, it was an idea but seeing this become reality is the best reward.”