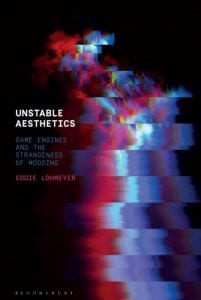 When a game releases, it can take on different forms. Through players’ and artists’ creativity, it can become something that has infinitesimal variations.

So, what’s art modding? Art modding is the alteration of a game system’s existing code or hardware to generate abstract spaces situated around a recent archaeology of the game engine.

Artists and players work on modifying existing code to a game engine to add assets that disrupt normal game functions and create something completely new in the process.

These modifications, also known as mods, range in scope from texture re-colorings and minor tweaks to complete new environments and experiences as well as complete disruption of system.

The popular game “Skyrim,” for instance, is a rich site for modding material and modding subcultures.

“I’m interested in how certain cultures and subcultures of artists have used and appropriated game engines to disrupt how we would typically play,” said Lohmeyer. “Normal play is based on competition, on reward, on pleasure, on optimizing flow within the game, and so much of my research looks at how artists throughout the decades have subverted that or dismantled those popular operations of play by either making the game unplayable or by altering the graphics in those 3D spaces in such a way that is disorienting, that is disruptive to our normal perception.”

The contemporary artists – Cory Arcangel, JODI, Julian Oliver, Krista Hoefle and Brent Watanabe, among others highlighted throughout the book – were attracted to the architectures of engines because they allowed them to explore vital relationships among abstraction, technology and the body.

Lohmeyer has also modified video games within his own art, which considers the embodied experience through processes of play and defamiliarization. Using deconstructive approaches, such as glitch –physical modifications to hardware and assemblage – his installations stage bizarre encounters with nostalgic media to unveil normal attitudes and perceptions toward technologies.

“I have modified videogames as part of my own art practice,” said Lohmeyer. “Much of my work consists of appropriating existing game technology and subverting it in a way that reveals our habitual relationships with videogames.”

Lohmeyer’s art explores the intersections among body and technology, particularly in how digital media opens participants to novel sensory and perceptual experiences. Through installation, sculpture and video his media interventions reconsider people’s habitual encounters with technologies through new avenues of play and engaging with unfamiliar and uncanny interfaces.

Additionally, his research explores aesthetic and technical developments within histories of digital media, with a particular emphasis on video games and their relationship to traditions of the avant-garde.

Lohmeyer received his Ph.D. from North Carolina State University in Communication, Rhetoric and Digital Media. While he was writing his dissertation, he was planning his book.

Lohmeyer is assistant professor of digital media in the Nicholson School’s Games and Interactive Media (GaIM) program. He came to work at UCF due to its inclusiveness of research practices that integrate forms of art and critical making. He has been at UCF for three years.

Lohmeyer is already thinking about his next book as he hopes to further his research into glitch and glitch aesthetics.

For more information on the GaIM program, click here.