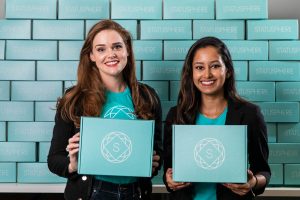 Kristen Wiley ’14 never imagined that just a few years after graduation she would be choosing between a dream job offer and starting her own business.

Had she accepted the offer, Wiley’s salary would have been almost unheard of for recent graduates in the marketing field. Instead, she chose the title of CEO for her own company — Statusphere.

As a result, the startup, which matches companies with social media influencers, has proven itself to be a leading innovative platform among Orlando’s emerging tech startups in just two years. Wiley credits the region’s growing entrepreneurial community and coworking spaces for much of her success and is looking forward to the possibilities in Orlando’s upcoming innovation district.

As an advertising and public relations major, Wiley was paid small amounts to advertise products for companies such as Hershey’s chocolates on her personal blog — a now-common practice in the marketing world known as influencer marketing. The experience landed her an internship at an advertising agency where she later accepted a full-time position upon graduation.

“They thought of me as this social media savvy graduate, so they allowed me to build influencer marketing relationships with brands,” Wiley says.

She was soon tasked with leading the endeavor for the agency when she noticed there was something missing from the relationship between brands and bloggers.

“Bloggers need a lot of content and products to post about, but they get expensive,” Wiley says, who was also a Burnett Honors Scholar. “And sometimes brands don’t send you products that match your interests.”

Wiley’s idea to use a curated subscription box for influencers in exchange for blog postings seemed like it could fill the gap. It was a fresh idea, but she wasn’t sure if it would work. Wiley bought joinstatus.com and continued working full time at the agency.

About a year later, Wiley was attending networking events around town when she was inspired by entrepreneur Suneera Madhani, CEO of the successful Orlando-based payment-processing company Fattmerchant.

“She was one of the first people who made me feel like I could do it,” says Wiley. “She had this confidence and strength in her business presentation, and something about that moment was a big turning point for me.”

Wiley then made a promise to herself: If she applied to a local business incubator program called StarterStudio and was accepted, she would pursue the venture full time.

Soon after, Statusphere was born in downtown Orlando.

StarterStudio Program Director Dayle Moore mentored Wiley in a variety of areas such as business model development, market strategy, fundraising and getting down her pitch.

“I’ve helped hundreds of start-ups, but it’s not every day you meet a founder like Kristen,” Moore says. “She brings a strong market understanding and passion to the table, while having an innovative idea and strategy to back it.”

Within the first year, Wiley had clients including Freeman Beauty, Safeway and Barnie’s Coffee and Tea Co. She also brought another Knight on to the team, Theresa Joseph ’17, as director of operations. Joseph’s previous experience included a finance internship at NASA. Much like Wiley, Joseph, a finance major, realized that she wanted to pursue creativity and flexibility in her work. The alumni say the best part about running a startup is the ability to bounce ideas off each other and implement new concepts quickly.

“I think Kristen and I both have the same policy on things,” Joseph says. “Just say yes to new ideas and new opportunities, and then we’ll figure the rest out.”

For Wiley and Joseph, the path to funding hasn’t been easy. Without investors, startups can’t scale the company up to a size effective enough to carry out its vision.

“Just say yes to new ideas and new opportunities, and then we’ll figure the rest out,” Joseph says.

On trips to Silicon Valley to pitch potential investors, Wiley had to fight her way through the criticisms of Statusphere. Investors liked the concept but said her location wouldn’t work. Jason Calacanis, a former New York City tech kingpin and well-known angel investor who was one of the first to fund Uber, was one of those critics.

He recommended Wiley take her company to cities such as Los Angeles, New York and San Francisco, suggesting they would be more beneficial to networking and company growth.

Wiley’s quick response? Orlando fits the job, and her dollars stretch further here. Orlando International Airport is one of the most affordable international airports in the country. There is a large talent pool of college graduates specializing in STEM. And the cost of living in Central Florida is significantly lower in comparison to San Francisco.

A strong case was made for keeping the company in Orlando to grow. Calacanis found the argument convincing enough to grant Statusphere a $100,000 investment and acceptance into the LAUNCH program, based in San Francisco.

With these new funds, Wiley and Joseph have been working on the logistics of the company and growing the team. They now have a staff of five, plus three interns —all are UCF graduates and students.

The momentum for Statusphere is high and the startup movement in Orlando is not likely to slow down anytime soon. As digital technology permeates more of the world’s economy and social media remains a channel for brand innovation, opportunities for startups continue to grow.

UCF Downtown will place students in closer proximity to accelerator programs such as StarterStudio, and give them more opportunities to collaborate with high-tech and creative companies in downtown.

“UCF Downtown will be thought of as a pipeline into the entrepreneurial community that’s already rooted downtown,” Joseph says.

“UCF Downtown will be thought of as a pipeline into the entrepreneurial community that’s already rooted downtown,” Joseph says. “Between the space coast and the university, Orlando is primed for something really cool.”

For the two alumni, growing their company from Orlando couldn’t be a better decision.

“The bigger the tech culture grows, the bigger it will feel for everybody in it,” Wiley says.

“Without this welcoming community here, it’s hard to envision what we would be attached to. There are benefits financially, but the benefits of having the support of the Orlando community are bigger than we could have possibly imagined.”