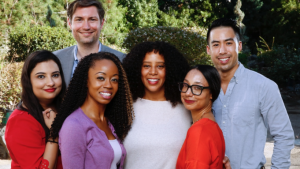 Nicholson MFA graduate Mike Diaz received a momentous opportunity when he became one of only six to participate in the esteemed CBS 2019-2020 Writers Mentoring Program, selected from a pool of more than 1,500 applicants.

The eight-month mentoring program pairs writers with CBS executive mentors. The mentors then help the writers develop a new piece of material.

Diaz has been paired with Pamela Soper, senior vice president of current programming, whose impressive list of credits ranges from working on hit tv-shows like “The Big Bang Theory” to “Sabrina the Teenage Witch” to “NCIS.” He has also been paired with Hugh Huynh, manager of current programming, who has previously worked with huge names such as Sundance and Nickelodeon Animation Studio.

The program, now in its 16th year, has provided writers with exposure, access and opportunity since 2004. More than 100 emerging diverse writers have graduated from the CBS Writers Mentoring Program and more than 75 careers have been launched this way.

“Our initiative focuses on professional growth that we believe lay the foundation for sustainable success in a very competitive marketplace,” said Tiffany Smith-Anoa’i, executive vice president, entertainment diversity, inclusion and communications, CBS Entertainment, in an article here. “All of the participants from last year are now staffed on shows, including ‘Hawaii Five-0,’ ‘NCIS: New Orleans,’ ‘Seal Team,’ ‘Nancy Drew’ and ‘Broke,’ all at the Network or Studio.”

Following the mentorship period, the writers participate in a 16-week workshop designed to teach them everything about the television business. The writers additionally receive access to powerful agents, managers, executives, showrunners and producers.

“I started the program in September and every moment of it has been fantastic,” Diaz beamed. “The first half involved writing a new pilot script to be used as a sample for the upcoming TV staffing season, under the guidance of my executive mentors. Now, the program is shifting into the workshop phase where participants meet weekly with various industry professionals to focus on the business side of television writing.”

Diaz was raised in Melbourne, Fla. and earned a bachelor’s degree in history in 2005 and a master’s degree in film in 2010 from UCF.

“My time at UCF Film as a graduate student was priceless,” Diaz said. “I still consider Ula Stoeckl, my thesis chair, to be my first creative mentor. She was incredibly kind and supportive while I wrote and directed my thesis feature. And having a background as a director has only made me a stronger, more visual screenwriter.”

The work he has done has taken him to six continents, allowing him to travel to fascinating places such as Iceland, Australia, Nigeria and Alaska.

The Florida native moved and lived in New York City for a few years, producing and teaching for National Geographic, before eventually relocating to Los Angeles, where he works as an executive producer’s assistant at 20th Century Fox, currently working on the Fox network drama, “9-1-1: Lone Star,” with his boss.

“I’ve had some great traction this year on a couple of projects,” Diaz said, “including one optioned pilot and developing a potential drama series with a production company. In addition to the new TV pilot I’m writing in the CBS program, I’m putting the finishing touches on a feature screenplay that I’d like to direct later this year. I’m also currently sending a new web series I wrote and directed to film festivals.”

To check out more of Diaz’s work, visit his website.

Mike Diaz is pictured top left among the other winners of the CBS 2019-2020 Writers Mentoring Program.