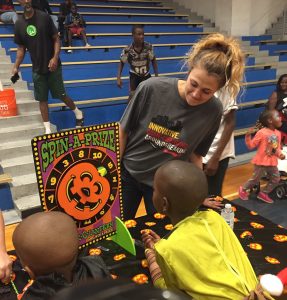 Nicholson School of Communication and Media Instructor Michelle Dusseau relishes in bringing lectures to life outside of the classroom as much as she enjoys giving back and creating positive alliances within the community. With some of Nicholson’s programs moving downtown in the fall, there is a great opportunity to start creating positive relationships with Parramore, a historically African-American community located in the city’s downtown district.

While serving as a volunteer marshal at commencement ceremonies in recent years, Dusseau heard former President John Hitt and current President Dale Whitaker issue invitations to the university community to build connections in the larger Orlando community and to serve the Parramore area in specific.

Dusseau and her student, Karina Nelson, thought it would be the perfect opportunity to create the Nicholson Impact Award and graduation cord, which would honor the call from the UCF administration. Dusseau felt that it would help human communication majors and minors recognize the powerful connection that they could make in service to their city.

Committee members decided to create the criteria for the cord with the hopes that there could be a long-term and measurable impact on the community.

“I believe a club built on this foundation can create something unimaginable,” Nelson said, also the school’s National Communication Association club president. “I hope that every student who chooses to be a member really sees the impact they are making on the community.”

The Nicholson Impact Award is earned through service projects organized by the club members. For example, the club participated in Halloween festivities. They collaborated with Parramore Kidz Zone for this event. Club members’ downtown helped set everything up and assisted with the activities for the children.

Dues for the student chapter of the National Communication Association are $15 per semester, the majority of that will be split between awards and honors for the students including the Impact Award, graduation cord and social events for Parramore residents. One dollar from each semester’s fees is going towards building a scholarship for a member of the Parramore Kidz Zone who enrolls in Valencia or UCF with an interest in communication.

“To me this means hope,” Nelson said, “through a genuine approach the Parramore community will see us as allies; through our efforts and commitment, the children of Parramore will see UCF as an opportunity accessible to them, and possibly become future students of NSCM who will choose to mentor to the generation behind them.” 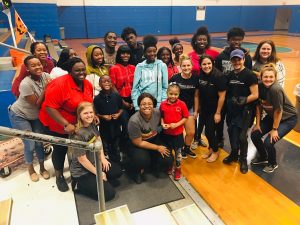 “Nelson was instrumental in wading through all of the red tape, gaining approval through the Student Government Association as well as filing all the necessary paperwork to create an official award and cord students could wear for graduation.”

After initial visits with community leaders in Parramore, the club faced some resistance.

“We found that in the past, students had come into volunteering, completed a few required hours, and left,” said Dusseau. “The community partners expressed the desire to build lasting relationships, but found this to be difficult with students who are engaged to meet assignment criteria, but don’t become invested in the community. This caused us to move slowly, deliberately, and work to build trust. After all, the students will come and go, but the school and club are here to stay; we want to prove through our actions that this is a long-term commitment the club is making.”

Dusseau said the feedback she receives from alumni furthers the notion that grades and GPA are not what is most significant. What they found invaluable was learning about the power of what they can accomplish.

“I would rather link it to the tangible impact of what they’re building in the community as a whole,” Dusseau said.  “I see so much potential in all of this, and in a very short period, we will be awarding some deserved student in Parramore with a scholarship check, saying this is for you to use for your education from our students in their education.”

Dusseau would like to continue to teach at UCF until she retires.

“When I think about the legacy and the impact that I would like to leave at UCF, it would be a footprint, not of my own, but of the impact the students that I have had the honor to serve,” Dusseau said. “My name and reputation attached to that is not nearly as important as being able to see the difference my students have made. It’s important to me that we are going into Parramore, not to change Parramore, but to respect their history, their legacy, and uplift the things that are most important to them as a community and I feel that we can only do that by partnering and listening.”