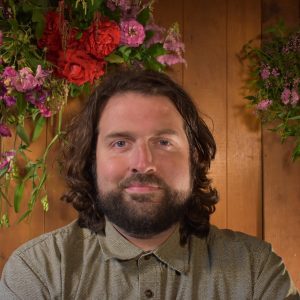 “Rhetoric accomplishes its work by inducing us to shift, at least potentially, how we dwell or see ourselves dwelling in the world.” This quote was by Thomas Rickert, author of Ambient Rhetoric: The Attunements of Rhetorical Being, a book that resonated with Robb Lauzon, a Post-Doctoral Scholar in the Nicholson School of Communication and Media at UCF. Lauzon shares his journey in an interview regarding his research, teaching experiences, goals and reflection with challenges encountered along the way.

Originally interested in pursuing a degree in marketing, Lauzon realized that it was not meant to be, and he decided to go into the communication field instead. More specifically, he took an interest in radio and broadcasting because, as a musician, he had a passion for music, resulting in doing a radio show. “Ultimately, my relationship with music and the entertainment industry got me into communication and media.” However, in his last semester at Oakland University while he was taking an intercultural communication course, an encouraging professor recommended Lauzon to pursue a master’s program. This idea stuck and after looking for jobs for two years, Lauzon became a professional public speaker and at the same time signed up for a graduate program at Wayne State University. Thinking that he would be doing intercultural communication work after enrolling in the graduate program, instead found himself “falling in love with rhetoric,” which made sense because public speaking and rhetoric go hand in hand. While taking a year off school, Lauzon was an adjunct professor teaching at 3 three colleges across five campuses across Ohio, driving more than 20 hours a week. It was then that Lauzon decided “to go the distance” and pursued his PhD degree at Rensselaer Polytechnic Institute (RPI) which also gave him time to “pursue music at a small scale while also having a retirement plan to fall back on.”

When discussing his goals for school and studies, Lauzon spoke in detail about his research and his overall experience. “Originally my goals for dissertation and publication, I wanted to write a book, which I think I still will once they finally and formally build a memorial which is what I wrote my dissertation on; the memorial to the victims of communism.” Even though Lauzon has not achieved the goal of writing a book, he has had the opportunity to research and collect findings in ambient spaces as well as the impact of environmental factors in different spaces for his dissertation. His advisor at the time, Katya Haskins, was studying memory and he would regret it if he missed out on the opportunity to study under Katya in this field. “What made me interested in memory studies was that there was an expert sitting right there at RPI that I could work with who also happened to be interested in materiality but from the perspective of memorials.” Haskins also introduced Lauzon and his peers to a book called Ambient Rhetoric in her class and gave a presentation that fascinated him regarding this topic.

Lauzon goes into detail when describing the work that he has accomplished and is hoping to achieve in the future. He explains that his interest in ambient spaces, environments and memorial spaces and their function stemmed from his curiosity in talking about material limitations in communication. More specifically, Lauzon wanted to see “how the cultural values that we have are viewed or programmed into software and hardware in the technical world.” However, there is no current material language that we can use to discuss these ideas. Lauzon references a rhetorician, Carole Blair, who wrote “Contemporary U.S. Memorial Sites as Exemplars of Rhetoric’s Materiality” who also studies memorials and he wanted to “pick up where she left off and advance a way of- my thoughts are that we may not have a language to talk about it, but we certainly don’t have eyes to read it.” In ethnography and social scientific research field observations, Lauzon realized that there was more language and ability to read this.

Lauzon shares his community-based research regarding the Transparency Project, Winter Park Sunshine. “I see my career emerging from this project because the origin of this project stems from dissatisfaction with the transparency surrounding the process of the Winter Park library.” The Winter Park library that opened was a huge project but the citizen engagement that should have taken place did not take place the way some citizens would have liked, resulting in about two thousand citizens signing a petition to do another referendum to vote again. He goes on to say that the civic engagement did not go as planned, which was a controversial issue that relates back to Lauzon’s dissertation about controversial memorials. Lauzon has actively gone out and documented what people were saying about the input in the project by asking them about their work, civic engagement, and how the transparency project is applicable to them. More specifically, “how can it help you to be a more active member of your community?” Whereas in his dissertation he was asking “how did this all go down [while] documenting this controversy?” An interesting finding that Lauzon revealed is that “leaders in Winter Park are very active in disseminating information, not just producing, but sharing [and] circulating information.” This is an important finding because it helps people understand how the small civic bubbles are working and how individuals are sharing information which could also help for the future to create a better civic life for everybody.

When asked about what he looked forward in his new research findings, Lauzon remarked that he anticipates testing the timeline hypothesis about the website of data regarding Winter Park and “making it accessible to people that don’t know that they can go to the city commissioners and ask for documents.” This way, it would make things clear as to how the controversy he discussed unfolded so that individuals can apply this to their own understanding and make changes to the vision of their city. And although Lauzon is unsure of whether his work will have a direct impact on ambience and the qualities of environments, this could help people in the future understand the built environment and the material world. But with his work at UCF, he recognizes that “the environments we create online are legitimate environments and I’m trying to create a timeline so that people can move through the Winter Park controversy chronologically…and hopefully this becomes a template we can institute in different emerging controversies…and give citizens the things they need to go out and get a better understanding of their world.”

Although Lauzon has had some interesting research findings, he has also encountered a few challenges along the way. An example he gives is that information is not always going to be published, “there has to be an apparatus to do that, typically it’s the press but if we keep defunding the press nobody is going to publish [it] and nobody is going to read about it…so the responsibility falls back on the citizens…and that is the problem with a privatized press.” The issue with the absence of reporters correlates to a lack of civic engagement. Lauzon also explains that knowing what he knows now, he feels as though he should be louder and use his voice to let people know that this is a problem, and it is our responsibility to know what is going on in the world as citizens.

Throughout years of working, studying, and researching, Lauzon has learned a lot and has reflected on this time. From studying the complexities of civic engagement and learning more about himself, he indicates that the reason he is here is because he ultimately lost his job in April 2021. Even through adversity, “in reflection, about the work I’ve done so far, people value the stuff that I do and I didn’t know they valued it until I came here. People value that I have an interest in land use issues and maybe this saved me from leaving academia…I want to shout out UCF for taking this chance on me because I’ve really been able to grow as a scholar…and certainly as a researcher and someone who has a voice in the community and has a stake in civic engagement.”