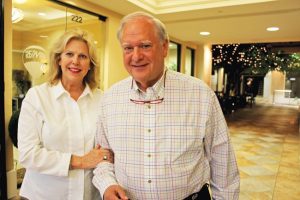 Anthony “Tony” Nicholson and Sonja Nicholson will be given the honor of being inscribed into the Almanac of American Philanthropy for their contribution to the Winter Park Memorial Hospital and its new Nicholson Pavilion.

The current Almanac contains well-known names, including the likes of Ben Franklin, George Washington, Oprah Winfrey, Ted Turner and Elon Musk, who have all made significant contributions to their communities.

“The Almanac of American Philanthropy is special to those who are connected with philanthropy,” said Tony Nicholson. “Sonja and I are honored by this entry into that ‘bible.’”

The honor comes from the Edyth Bush Institute for Philanthropy & Nonprofit Leadership at Rollins College, which is the premier source for nonprofit training, certificates and custom programs. It was established to strengthen the impact, effectiveness and leadership of nonprofit and philanthropic organizations through education and management assistance.

“I gave to Winter Park Hospital because this is my hometown and my son, Reid, was born there,” said Tony Nicholson. “I have also been a patient, along with Reid, and saw firsthand the need for better rooms, rehab centers and surgical rooms.”

The Winter Park Memorial Hospital was originally built almost 63 years ago, so parts of it have older infrastructure and some of the bedrooms don’t have their own bathrooms. The addition of the Nicholson Pavilion, located on the east side of the hospital, will help tremendously with comfort and healing through its amenities, such as the 140 all-private rooms for inpatient rehabilitation, a new lobby and programs for stroke, brain injury, spinal cord health, orthopedics and neurology.

“I was delighted to hear that the Nicholson Pavilion at AdventHealth – Winter Park is now open,” said David Odahowski, President of the Edyth Bush Foundation. “This healing facility will be the catalyst for helping people build a life of whole-person health.”

To take a virtual tour of the new, five-story patient care pavilion, which is the largest project the hospital has ever had, click here.

“Winter Park Memorial Hospital was founded more than 60 years ago with the goal of creating a world-class hospital to serve the community’s health needs close to home,” Jennifer Wandersleben, administrator of Winter Park Memorial Hospital, said in this article. “It is because of the generous support of Tony and Sonja Nicholson, Brasfield & Gorrie and RLF architects and the dozens of men and women who have been working tirelessly to give Winter Park this stunning Pavilion, that we are one step closer to delivering the expanded health care services that this rapidly growing area needs.”

Their continued philanthropy with UCF has earned them the rank of Diamond Knights, which is the highest level of donor giving. Sonja Nicholson’s own humanitarian efforts extend to many parts of the Central Florida community, with donations that have helped The Coalition for the Homeless, the Central Florida Children’s Home, the Shrine Circus and Kissimmee Little League.