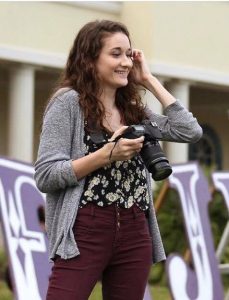 The following article is a guest submission from Isabelle D’Antonio, a senior journalism major in the Nicholson School of Communication.

I’ve lived in Florida for more than 11 years and have never taken hurricanes seriously. They were always just an excuse to get out of school, eat tons of junk food and read books by candlelight. Despite the predicted wind speeds and widespread destructive impacts, I still didn’t think much of Hurricane Irma. My most pressing concern was what snacks to buy and where to get an air mattress to camp out at Orlando Sentinel office, where I work.

Working at the paper Sept. 9 and Sept. 10 was hectic, but I seized the opportunity to bond with my colleagues and learn about covering a true storm. I stayed up with my coworkers until 2 a.m. to watch the storm at its worst and even stood outside for a bit to witness its fury.

He told me the apartment that we had moved into only six weeks prior was flooding and there was no way in. I instantly panicked, left the office and drove to my apartment at the Place at Alafaya. I was shocked by what I saw – the roughly quarter of a mile leading to my building was thigh-deep. I waded through the cool water to my apartment, but couldn’t open the door. I climbed in through the window and helped my boyfriend throw what we could into duffle bags. We put all our personal items and leftover clothes as high as we could, grabbed my rabbit and left through the window. Trekking through the water to the car was surreal – I felt like someone you see on TV.

The next day, the reality sank in. We spent the next few days figuring out what to do next. We lost most of our furniture, some belongings and my boyfriend’s car was totaled from water damage. We were lucky enough to move into another unit in our complex within a few days. We bought cheap furniture on Facebook, ate a lot of McDonald’s, made several trips to Walmart and filled out a Federal Emergency Management Agency (FEMA) application. It’s been expensive, physically and emotionally exhausting, and overwhelming to deal with on top of school, work and other commitments. We’re anxiously waiting to hear back from FEMA about what type of aid we’ll be receiving, if any.

Two days after the flood, when the waters receded, I went back to take one last look at my former home. It smelled terrible, the furniture was ruined and a pile of my clothes sat molding in a corner. This had been my first “real,” non-student apartment. The time and effort I spent to make it feel and look like home just six weeks prior was a waste.

I’ve since put all my energy into making my new apartment a home, and I’ve finally begun to settle in. One thing I have been grateful for is the amount of kindness and support I’ve gotten from family and friends. So many people reached out to offer help, a place to stay or other support. If this hurricane has made me realize anything, it’s that Floridians are a tough bunch who support one another despite what Mother Nature throws at them.

D’Antonio is a sister of the Delta Zeta sorority and a senior student assistant at Transfer and Transition Services. This story originally appeared on Nicholson Student Media here.