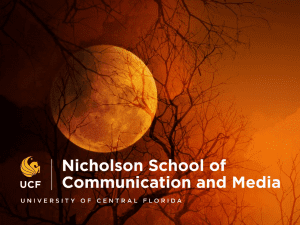 Nicholson School students and alumni have a legacy of crafting imaginative and heart-pumping films as well as video games.

One of the most well-known horror movies to come from UCF is “The Blair Witch Project,” which put UCF’s film program on the map by breaking multiple records – such as becoming Orlando’s first produced feature to ever be screened at Sundance. Several UCF films have been showcased at Sundance since then!

Students and alumni of the film program continue to produce successful films – including many in the horror genre.

Here are a few hair-raising UCF-affiliated movies and short films to watch now:

Alongside films, many students that are part of UCF’s undergraduate game design program and the interactive entertainment graduate program through the Florida Interactive Entertainment Academy (FIEA) have created various games – with quite a few having heart-thumping qualities.

Students work on projects and create various games or mini games throughout the semesters. FIEA master’s students also often work toward their capstone.

Capstone is the creation of a full game over multiple semesters, where students will go through the entire development cycle. Many students decide to publish their capstone games through various avenues, such as Steam or Xbox, earning their first published title.

Here is a short list of some NSCM student-crafted spooky games:

Enjoy your watching and gaming!