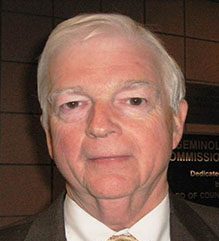 Holsenbeck holds a B.S. in mathematics (with honors) from Auburn University, a M.Ed. from the Johns Hopkins University, and a Ph.D. in higher education management systems from the Florida State University. He has written, spoken, published and taught extensively on all aspects of public relations, governmental relations, teaching and testing in postsecondary education, and other related professional endeavors. In his career, he has managed every aspect of university advancement and development.

Before assuming his present role at UCF in 1993, Holsenbeck was senior counsel to the president and associate vice president for university relations at UCF, associate vice president for development and alumni affairs at the University of South Florida, the director of university relations at Auburn University, and vice chancellor for development at Auburn University at Montgomery. He is active in several local and national civic and professional organizations, including the Central Florida Partnership, the Economic Development Commission of Mid-Florida, Visit Orlando (board of directors), the Orange County R & D Authority (chairman, 1999-2000) and the Council for Advancement and Support of Education. Holsenbeck served on the CASE National Board of Trustees and was chairman of CASE’s National Commission on Government Relations. He was chairman of the CASE National Association of State Universities and Land-Grant Colleges (NASULGC) and American Association of State Colleges and Universities (AASCU) Task Force on State Relations from 1996 through 1997. In 1999, Holsenbeck received the highest national recognition for his state relations activities, the Swede Johnson Award sponsored by CASE, NASULGC and AASCU. He has served on the Boards of Kids House of Seminole, Work Force Central Florida, the UCF Foundation, the National Center for Simulation, the UCF Alumni Association and the Board of Visitors for the FAMU College of Law.

Holsenbeck is a captain (retired) in the U.S. Naval Reserve and was director of basic enlisted mathematics for the U.S. Navy Nuclear Power School from 1967-69. He served as the principal civilian advisor on college and university teaching and testing to the Chief of Naval Education and Training in Pensacola, Florida. In that capacity, he conducted teaching seminars for all NROTC Navy and Marine instructors from 1971-1998. As a drilling reservist, Holsenbeck held four commands in Montgomery, Alabama, and Orlando, Florida.

He is married to Joyce A. Clampitt, Ph.D., and has two children, Amy Lyn and Alan.