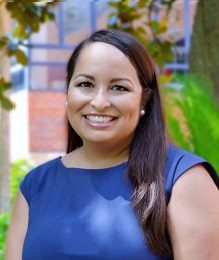 Erica Rodríguez Kight, Ph.D., is a lecturer in journalism, radio-television and Hispanic media at the University of Central Florida.

As part of the UCF Nicholson School of Communication and Media faculty, she co-directs the school’s Hispanic Media Initiative and teaches courses on news reporting, electronic journalism, TV news and diversity in U.S. media.

Kight previously worked as a newspaper reporter on the criminal justice and education beats for the Bradenton Herald, as well as TV news assignment editor, TV news general assignment reporter and Sunday evening anchor for ABC affiliate WCJB-TV 20 News in Gainesville, Florida. As a journalist, she won several awards for her work, including recognitions from Florida Associated Press Broadcasters, the Society of Professional Journalists, the Florida Emergency Preparedness Association and Alachua County Sheriff’s Office.

Co-editor and chapter author of undergraduate textbook LatinX Voices: Hispanics in Media in the U.S., Kight has presented her academic work at various international conferences, including the Hispanic Association for Colleges and Universities, Cuba TIES, and Partners of the Americas Higher Education Partnerships. Her work has also earned grants from the Nielsen Foundation, as well as the Partners of the Americas 100,000 Strong in the Americas Marlene M. Johnson Innovation Fund. Most recently, the UCF Latino Faculty and Staff Association honored Kight for her dedication to serving UCF’s diverse community with an Intentionality Award.

While working as reporter and news editor for the FSView and Florida Flambeau, and reporting intern for the Miami Herald, she completed her undergraduate studies in English literature at Florida State University with a minor in print journalism from Florida A&M University. She later earned a Master of Arts and Doctor of Philosophy in Mass Communication from the University of Florida, where she researched media framing and underrepresented communities, while teaching courses in writing for mass media, investigative journalism and business communication.

In 2019, Kight wrote and produced a documentary film titled One Way about the so-called notorious gang The One Way Boys from Orlando’s Parramore neighborhood. The feature-length film is set for release in Summer 2020.

Kight is a bilingual Cuban American daughter and granddaughter of immigrants, born in Philadelphia, raised in Miami, wife, mother, adoptive parent of two rescue pups, founder of Kight Media LLC, who enjoys traveling, cooking, all things Disney and spending time with her family.