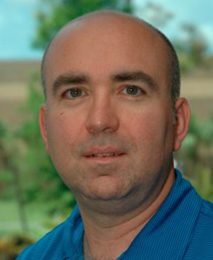 Lance Speere specializes in teaching digital and multimedia journalism, along with photojournalism and news reporting. He is a longtime faculty advisor to student media operations in Illinois and Florida and served a term as national president of College Media Advisers Inc.

As a reporter, Speere freelances for The New York Times, assisting with coverage of the George Zimmerman-Trayvon Martin murder trial in Sanford, Florida, and the Florida gubernatorial campaign of Charlie Crist.

He received his bachelor’s degree from Washburn University of Topeka, Kansas, and a master’s degree in journalism from Kansas State University, after which he worked as a reporter for newspapers in North Carolina, Kansas and Florida.

His primary research interest involves the study of newspaper women’s page editors between 1950-1975. Along with his research partner and wife, a tenured professor at the University of Central Florida, he’s presented at national conferences and published several articles on the subject of women’s page editors and food journalists at newspapers in the decades before those sections were converted to lifestyles or features sections. Many of the women they study were prominent in the state of Florida.
Recent publications include articles in Journalism and Mass Communication Quarterly, Media History Monographs, and Gastronomica: The Journal of Food and Culture.

In his free time, he loves to visit the beach with his wife and two young boys.