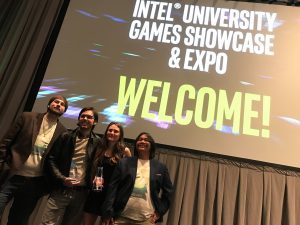 FIEA student game “Hollowed” won the “Best Visual Quality” award and the second place award for “Best Gameplay” at the 2018 Intel University Games Showcase, held March 22 in San Francisco. It is the second straight year that a FIEA game has placed in two different categories, as “The Channeler” in 2017 won “Most Innovative” and placed third in “Best Visual Quality.”

As a result, Intel will donate $15,000 worth of equipment to the FIEA program.

The showcase featured student games from 12 of the best game design schools from around the country, who competed in three award categories: “Most Innovative,” “Best Gameplay” and “Best Visual Quality.”

Recent FIEA graduates Erin Marek and Charley Choucard led a 5-minute game demo of “Hollowed,” which allows the player to control a character and her soul as they travel through the stages of grief. After the presentation, game industry judges asked the team questions in front of the 250 people in attendance. A team of 18 students completed the game in seven months as part of their master’s thesis.

This is the fifth year Intel has put on the showcase, which coincides with the Game Developers Conference, the largest conference in the world for video-game developers.