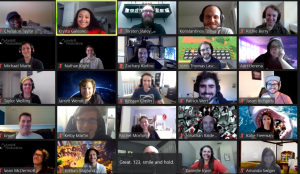 The partnership between Electronic Arts (EA) and UCF’s Florida Interactive Entertainment Academy (FIEA) is offering hope for 70 students learning to adapt as they prepare to start their job search in an economy still reeling from the global pandemic.

FIEA Day is a yearly event catered by EA for FIEA students, structured around career development. It’s a chance for students to speak with professionals that are in positions the students admire.

Transforming what would have typically included an in-studio tour and in-person career development discussions, EA and FIEA pivoted to create a virtual edition of their annual FIEA Day.

Krysta Galeano, Next-Gen Talent Recruiter for EA, spoke on the meaningfulness of events such as FIEA Day.

“I love that FIEA Day unites our team with the next generation of game developers,” said Galeano “These students will inform, design, manage and produce the next set of games our players and loved ones come to cherish. We have lots to learn from each other and FIEA Day is a conduit for those discussions.”

During FIEA Day, which occurred this year on June 12, students received feedback from EA employees after the employees playtested student games.

“Izcalli of the Wind” was one of those games. Users play as Izcalli, who rides a hoverboard that contains the soul of a trapped god, and travels throughout the realm to restore energy to the conduits that power it.

Graduate student Welling had to step up as a project lead in the middle of the development of “Izcalli of the Wind.”

After only two weeks as the new lead, the coronavirus pandemic also hit, forcing everyone to adapt to working solely online for the remainder of the project. Despite initial hurdles, the team carried on with production, proving their adaptability in an ever-changing world.

“The video game industry is all about adaptation,” Welling said. “Things change on a regular basis and you have to be able to adapt to those changes. It’s unfortunate that we had to work remotely, but the experience has been useful.”

The students’ completed games will now hit Steam, a video game digital distribution service that is known as the ultimate destination for playing, discussing and creating games.

While the pandemic has caused some difficulties, video game playing and sales have reached record highs, which is good news for the aspiring students at FIEA.

“[Being at FIEA] has been my favorite year of my life so far,” Welling stated. “It’s hard work, but it’s also made me grow so much as a person.”

“EA has been a tremendous partner in supporting the growth of the game industry in Florida and the academic growth within the State University System,” said Ben Noel, FIEA’s executive director.

Since EA partnered with UCF to establish FIEA in 2004, the relationship has flourished into an important talent pipeline.

Now, one of every two new graduate hires in the development studio at EA Tiburon have come through FIEA over the past two years. EA looks for employees who leverage determination, pioneering and creativity.

For more information on FIEA, check out their website.