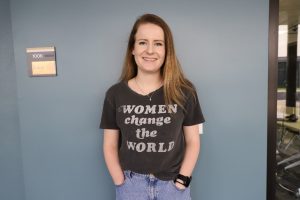 Digital media major Delaney Lekien is one of the original four Nicholson School of Communication & Media students who began working on a technological project to help post-traumatic stress disorder (PTSD) victims through an internship with UCF Restores.

Roughly 500 veterans and active duty personnel have passed through UCF Restores as well as 225 first responders.

Pat Scanlon, a 66-year-old retired firefighter from Clearwater is among the many people that UCF Restores has helped.

He first started treatment at UCF Restores’ main clinic in October of 2018.

“UCF Restores saved my life,” Scanlon said, in an article by the Orlando Business Journal.

To make the treatments more accessible, UCF is developing its own virtual-reality software program, which Lekien has had a hand in creating. This revolutionary program will sell for $5,000 compared to the $30,000-$35,000 programs currently on the market.

“It’s been such an honor to even be considered for a position like this,” Lekien said. “Being able to create virtual environments is something that I already enjoyed doing and now I get to create them to help people. It feels surreal that a project I’m working on as an undergraduate can have such an impact on people’s lives.”

VR immersion therapy allows the patient to virtually re-live their trauma repeatedly so the person can disassociate triggers linked with the visual, audible and olfactory memories that stimulate anxiety.

Deborah Beidel, Ph.D., professor of psychology and the executive director of UCF Restores, explained that anything from the color of the pillows to the existence of a light to the entire setting itself can be altered in the new software.

“We can change everything, something that current systems can’t do,” Beidel said.

The customizable aspect is significant because often with PTSD, an unrelated detail triggers the person’s trauma, so being able to warp the details to exact specifics has aided in the program’s success.

VR immersion therapy has been so successful that the U.S. military is investing in the program as well. UCF Restores plans to launch therapy programs in three U.S. military installations.

While VR immersion therapy can be beneficial, UCF Restores uses a variety of methods, including relaxation therapy, group therapy and exposure therapy.

All treatment is free for Florida residents that are active duty military, veterans, first responders or victims of other trauma. This also includes treatment for military sexual trauma or survivors and families of survivors of mass shooting events such as Pulse or Marjory Stoneman Douglas High School.