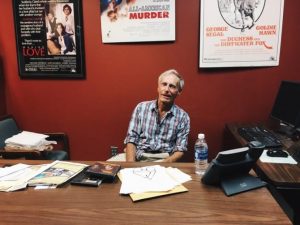 Making Love was the first major studio production to present gay characters and relationships in a positive light. Michael Ontkean plays a doctor married to a TV executive (Kate Jackson) but struggling with homosexual impulses. When he meets a liberated writer played by Harry Hamlin, he has his first gay romance and it transforms the lives of all three characters. Oscar winner Wendy Hiller, Oscar nominee Nancy Olson, and Tony winner Arthur Hill co-star. This enormously influential, groundbreaking film was written by Sandler, from a story by A. Scott Berg, and directed by Arthur Hiller, the director of Love Story, Silver Streak, The In-Laws, The Hospital and many other successful movies.

The movie was screened by Laemmle Theatres and the Anniversary Classics Series in June during Gay Pride month in honor of its 35th anniversary.