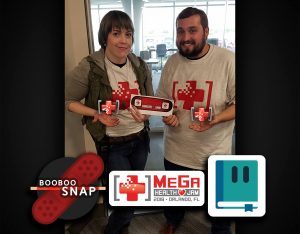 Ask young kids what it’s like to get a shot or go to the doctor, and you’re likely to get some frowns. Two students, Christine Wright and James Gaiser from UCF’s Florida Interactive Entertainment Academy, wanted to change that.

Their invention, “Boo Boo Snap” is a prototype for an app on your smartphone that projects 3D images, talking characters and medical advice onto regular bandages. Their idea was developed April 13-14 at the inaugural MeGa Health Jam, where it was awarded “First Place” by a panel of medical experts and game developers.

The app was chosen from 17 projects made at the local event, which gave professional and amateur game developers 48 hours to prototype a game, technology or app to be used in healthcare. As part of their winnings, the team won free booth space at future local tech events, legal and medical consulting services and access to office space.

“The judges loved it because it’s hi-tech but also really low-tech with the Band-Aids,” Gaiser said. “And one of the most common causes of infection in hospitals is improper changing of bandages.”

“When I thought of the concept I was only hoping to make something my niece would go crazy over, Wright said. “But as the game jam progressed we spoke to medical specialists who told us that this idea could improve health care across all ages. Well, that inspired us to develop “Boo Boo Snap” into something that improves the healthcare industry.”

MeGa Health Jam’s goal was to unite the central Florida medical community with the video game community to help solve some of health care’s most urgent problems.

Gaiser and Wright might have done that as well as make some kids smile.

To learn more about “Boo Boo Snap” go to their web page.