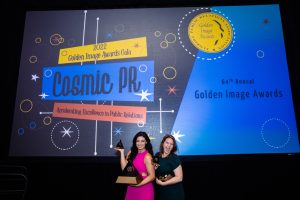 Earlier this month, the Orange County Government Office of Communications received the state’s highest recognition for Public Relations strategy and execution—the Dick Pope All Florida Golden Image Award—for its work on the #IGotMyShot initiative. The Orange County Communication (OCC) team members at the forefront of this initiative were Despina McLaughlin, an alumna from the Nicholson School of Communication and Media, and her colleague Sarah Dillon (UCF Rosen ’13). McLaughlin goes into detail about her time with Orange County , which nearly began with supporting emergency communications with a global pandemic.

When asked to discuss her journey with the OCC team, McLaughlin replied that “after spending 10 years in local television, as a sports reporter for News 13… and covering NBA playoffs, UCF’s Peach Bowl Championship, interviewing the likes of Tiger Woods, Dwight Howard and Alex Morgan – I felt that I reached a pinnacle in that career path.” She was ready for a change to something that not only lined up with her professional interests, but her desire to make an impact in public service. She joined the Orange County Government Communications Team in November 2019 and four and a half months later was thrust into a crash course on crisis communications relating to COVID-19 response. She  has not looked back since.

The purpose of the #IGotMyShot campaign is to combat vaccine hesitancy. McLaughlin explains that since COVID-19 vaccines became available in April 2021 to Florida, research revealed that hesitancy was growing, especially with minorities under 50 years old, due to the spread of misinformation and the speed of vaccine development.  However, she added, research also uncovered this demographic could be swayed once armed with facts. The Orange County Government Communications team set out to reach minority residents and encourage vaccination through the #IGotMyShot public safety campaign. Their  efforts paid off as Orange County minority vaccinations more than doubled and the overall vaccination percentage increased from 28% to 71% by the campaign’s conclusion on September 14, 2021.”

McLaughlin also outlined how their goals and objectives were met and exceeded. These included:

This experience has taught McLaughlin that collaboration and looping in key stakeholders is crucial in executing campaigns. “I cannot tell you how often I was reaching out to trusted communicators, elected officials, major organizations across the region for assistance, feedback/guidance and most importantly buy-in,” she said. “In that same breath, I will say being able to [work] with a small staff (there were two of us dedicated to this campaign roll-out) allowed for our team to make quick decisions, stay nimble and allowed for speedy execution—which paid out dividends as we were on a very tight 7 week deadline to rollout the initiative. Having leadership support you and believe in you is big!” Staying consistent and doing the work were vital to the success of the initiative.

Being with the Orange County Communications team has meant a lot to McLaughlin. She states that she proved to herself and the team that she can put together and lead a successful communication campaign in a time of crisis and uncertainty. “Together, alongside my colleague Sarah Dillon, we truly saved people’s lives with the #IGotMyShot initiative. We were able to use real-time research and data, to connect with local doctors, community leaders to answer our community’s biggest questions and concerns, debunk misinformation and ultimately encourage residents to protect themselves. It was a fulfilling ride!” Not only that, McLaughlin also describes the positive response from the community in which she has created deep-rooted trust and relationships with many community leaders and residents. She adds that “as for a difference in my career, the awards that we’ve won has brought a lot of positive attention to the Orange County Government Office of Communications and has helped to build personal credibility and reputation as a strategic public relations practitioner.” 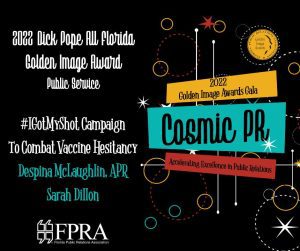