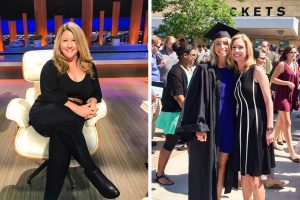 Neither Jen Rosen ’09 (left) nor Kelly Nader ’16 (right) saw themselves in casting and production when they first began taking radio-television classes at the Nicholson School of Communication and Media.

Both women took different career routes after graduation, but years later, the two NSCM grads crossed paths on the set of the award-winning series “Shark Tank.”

Nader was introduced to “Shark Tank” through an internship and started working in 2015 as a casting director while Rosen joined as a casting manager in 2017.

They worked on set together for years, which was made possible by another alumknight – Clay Newbill ‘82. Newbill began the exclusive Clay Newbill Hollywood Internship that Nader was able to participate in which brought her to “Shark Tank” originally.

Newbill, a Nicholson alum and executive producer of “Shark Tank,” began the internship in 2013 to bring radio-television students to Los Angeles. While the internship wasn’t available for Rosen when she was a student, Nader was able to take advantage of it.

“I am so grateful that UCF and Clay Newbill gave me amazing opportunities and an internship that changed my life,” Nader says. “If you work hard and take chances as they come, you will cultivate your own best reality.”

Nader credits her achievements to the Clay Newbill internship, but the road to success wasn’t as simple as internship-turned-career for Rosen.

Rosen worked at a resort near Disney after graduating, but she felt unsatisfied as her dreams were being cast aside. She decided to move to California with her husband and dog; however, she had no actual plan or any solid job lined up before heading West.

In California, an old friend from UCF reached out to Rosen to let her know about a local job opportunity in the casting department of Reveille Productions. Through that position, multiple connections availed themselves and led to her working on “Shark Tank.”

The casting department of “Shark Tank” was recently nominated for an Emmy. This is Rosen’s greatest achievement to date. She is ecstatic with the opportunities that UCF initially provided for her.

“Our casting department has never been nominated before,” Rosen says. “This was a huge deal, not only for me, but for our whole department. It was an incredible and unexpected experience.”

Nadar is still working on the “Shark Tank” staff while Rosen is now the associate producer for a show called “Full Bloom.”

This story was originally published on UCF Today on January 9, 2020.