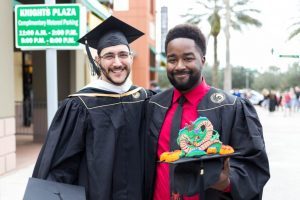 The University of Central Florida’s Florida Interactive Entertainment Academy ranks No. 3 in North America, according to The Princeton Review and PC Gamer magazine.

FIEA, an anchor of UCF’s planned downtown campus, has been in the top five programs for each of the nine years the Princeton Review has done the rankings.

“I’m always happy to see the Princeton Review reward our innovation and effort to try and be a leader in interactive entertainment education,” Ben Noel, Executive Director of FIEA, said. “The future success of our program will depend on the continued hard work of our students, faculty and staff.”

Since opening its doors in 2005, FIEA has graduated 606 students. Graduates are working at more than 139 companies around the world, including Apple, DreamWorks, Electronic Arts, Blizzard, Bungie, Zynga, Ubisoft, Disney, Microsoft and Nintendo.

The average starting salary for recent FIEA graduates is $62,600. Graduates are working on some of today’s most popular franchises. Those include God of War 2018, Fallout 4, Fortnite, Star Wars Battlefront II, Madden NFL 18, NBA 2K18, Call of Duty World War II, Extinction and Rise of the Tomb Raider.

“FIEA is a global leader in graduate education,” said UCF President Dale Whittaker. “Its faculty and students anchor an emerging media industry cluster in downtown Orlando and advance our region’s recognition as an interactive entertainment powerhouse. We’re excited to bring more students downtown in related fields as part of our new campus because they will benefit from the foundation FIEA has built.”

FIEA is designed to graduate talented and well-qualified professionals to work in video games, new media, film and simulation industries.

The Princeton Review chose the schools based on its 2017 survey of 150 institutions in the U.S., Canada and abroad offering game design degree programs or courses. The 40-question survey gathered data on everything from the schools’ game design academic offerings and lab facilities to their graduates’ starting salaries and career achievements.

To see the full rankings, go to https://www.princetonreview.com/college-rankings/game-design/top-25-game-design-grad