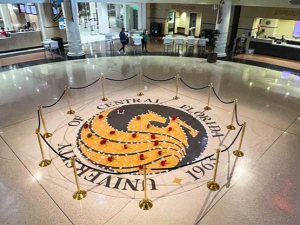 The Marjory Stoneman Douglas Shooting was a tragic school shooting that occurred in 2018, at the high school that NSCM student Alexandra Sullivan was attending at the time.

“I was 15 years old,” said Sullivan. “It was my first year on the Marjory Stoneman Douglas yearbook staff. I spent my summers at yearbook camp and my weekends at journalism workshops. I’d spend my time at events, writing articles, conducting interviews and working with my fellow classmates on our award-winning yearbook. I loved what I did, and I considered myself pretty good at it.”

News trucks lined the streets for the next few months with their cameras and microphones aimed to capture any tears, anger or statements from the “survivors.” She felt as though she was in a fishbowl, and they wouldn’t stop tapping on the glass and staring, waiting for any reaction they could get out of her and fellow students.

“Every morning at 7 a.m., I stood outside of the familiar burgundy gates struggling to muster up the courage to walk back into the place that held those painful memories,” said Sullivan. “This was made more difficult by the swarms of journalists standing outside of the gates. After dealing with that, my view of journalists was tainted. But for the next two and a half years of my high school career, I stayed on the yearbook staff and made sure to treat everyone I talked to with empathy and respect.”

At the time, they had to rethink the entire 2018 yearbook in a month. They chose their yearbook’s theme from the year before, and it perfectly captured what they stood for as a staff, as a school and as a community.

“We called it ‘As One,’ said Sullivan. “As one staff, we sat in that cramped room and produced a 452-page book that encompassed love. As one school, we came together to cope, heal and advocate for change. We decided the shooting would not overtake our book. It was important to us to preserve the memories that came before that day, the normal parts of high school life: Homecoming. Football games. Band practice. We’d have two Valentine’s Day spreads; One with the photos our photographers took that morning of candy and balloons, and one that discussed the tragic events of that day.”

At 15, her yearbook coverage shifted from covering pep rallies to writing obituaries.

They knew that it was up to them to memorialize 17 people they lost in their yearbook. They decided to include 17 profiles that spoke about their lives, not their death. They spoke to their family, friends, classmates and significant others, and made sure to do so with courtesy about what they were going through. They had two rules: get it right and respect their sources.

The following year, Sullivan became the profiles editor herself and kept that position until her senior year when she graduated during the COVID-19 pandemic. She was proud of her work on the yearbook staff but knew her time as a “student journalist” was over. Once she had experienced life in the fishbowl, she didn’t want to be the one tapping the glass.

So, Sullivan decided to go to the University of Central Florida to study advertising. But the journalism bug stayed a part of her – she joined a writing organization and a magazine staff, and she was enjoying them much more than her classes.

“I loved being creative, being a part of a staff, writing and finding stories,” said Sullivan. “I watched a friend of mine, a journalism student, and I could see myself doing everything she was doing. So, I gave it a chance. I took my first journalism classes, Principles of Journalism and News Reporting with Senior Instructor Rick Brunson. He taught us the ways to be ethical as journalists. He taught that we as journalists can change the narrative for other journalists. We can be the good ones, the ones with empathy and respect. The ones that handle trauma with mindfulness… And I fell in love with journalism all over again.”

Sullivan hopes to spend her time in the world of journalism educating others on how to talk to victims of trauma and to be respectful in crisis situations. By being a journalist who values someone’s feelings over reporting the story first, she aspires to be a journalist that will be a positive force in the world.

This article was originally written by Alexandra Sullivan for UCF Today.