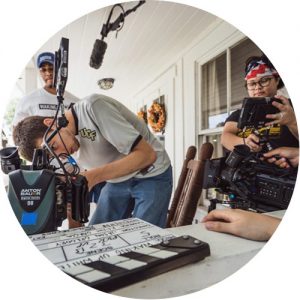 The Emerging Media MFA – Feature Film Production is a terminal degree, the highest degree awarded to filmmakers or film artists. It is a highly selective and rigorous professional film production program for visual artists and film practitioners who demonstrate exceptional artistic and intellectual prowess, evidence of significant professional promise and a commitment to the expressive potential of digital filmmaking and the exploration of non-traditional modes of distribution. The MFA in Feature Film Production produces graduates with mastery of storytelling through the digital medium as it encourages the candidate to find his or her personal style. Entrepreneurial in spirit, the program emphasizes story, performance, aesthetic choice, business, and creative thinking. When participation is committed and complete, the program develops graduates who can compete in the worlds of national and international independent filmmaking.

While students may make a thesis film outside the narrative feature film model (i.e., an experimental or documentary film), all MFA candidates are required to take the core required courses that teach the customs and skills required of the narrative model. Upon completion of the degree, each student will have produced a microbudget digital feature film or long-form equivalent body of work and prepared a marketing strategy for its distribution and exhibition. The budgetary limitation is designed to encourage the student to move away from more traditional modes of production toward an approach that minimizes crew size, cast size, shooting time and production costs in favor of more careful planning, more personal filmmaking and more creative use of the means of production.

We welcome innovative approaches within the digital cinema paradigm that reimagine how new technologies can create alternative performances to exploit the tension between narrative and experimental storytelling, creating a new agency for actors and new expectations for audiences.