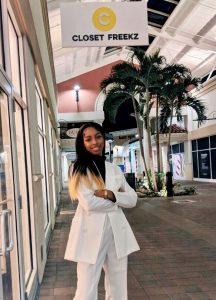 Meet Ashley Bolling, ’12, a fashionista who is altering the world of apparel one vintage top at a time. She runs Closet Freekz, an exclusive boutique which sells one-of-a-kind clothes for people who wish to buy different, shop different and make their own statements.

Closet Freekz started simply as a small online retail website. A few years later, Closet Freekz is expanding with a new Orlando location and will soon become an international brand with the opening of a store in Toronto, Canada.

Initially, Bolling’s store had a location in the Florida Mall, but malls typically just have high fashion brands or fast fashion brands.

Bolling explained how fast fashion brands, such as Forever 21 or H&M, sell low cost products in abundance, but how that the rapid consumption of cheap clothing is creating an environmental crisis. Landfills are accumulating too many clothes, she said.

Both high fashion and fast fashion have been receiving backlash for their harmful environmental effects. As a conscious consumer, she didn’t want to go down that same route. She wanted to also be a conscious creator.

“The reason I went into the re-purposed and vintage apparel is because it helps extend the lifecycle of clothing that would otherwise be sitting in a landfill hurting the ozone,” Bolling said. “It’s fashionable and contributes to conscious shopping. Probably about 90% of my own clothes are re-purposed or vintage.”

Bolling’s original store in the mall received so much traction that she couldn’t keep up with mall demands.

“We were given the option to re-open for a longer-term contract and in that time frame we got so many people coming to the information desk asking where the store was that the mall kept reaching out,” Bolling said. “But in between that time, I got the opportunity to do a two-store deal in Orlando and Toronto, so I’m going to launch our chain that way.”

Bolling is now gearing up for a larger store opening in the Orlando International Premium Outlets, which will hopefully be ready in October, and a Toronto launch, which will happen in 2020.

Bolling remains actively involved with UCF by providing opportunities for students. She hosts an internship program, where she has mentored and employed three UCF students each semester for three semesters so far. She hopes to inspire a love of entrepreneurship in others.

Bolling attributes her achievements and tremendous growth with Closet Freekz to the tools she gained while pursuing her bachelor’s degree at UCF. Instead of studying business, she decided she wanted to know more about how to network and make better, lasting connections.

“My degree is in interpersonal-organizational communication. The degree is useful to have to run any type of business for yourself because networking is nothing but communication between two people. The organizational side helps in running a team and having a staff, as you need to know how to communicate with them to get things done,” Bolling stated.

Go to Shopclosetfreekz.com or @closetfreekz on social media to check out the latest styles available.