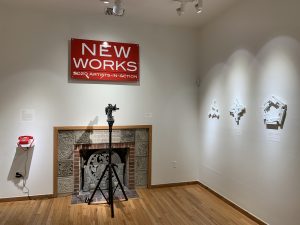 Assistant professor of digital media Matthew Mosher’s work will be on display at the Art & History Museums in Maitland until January 17, 2021. He is part of the Artist-in-Action group show, exhibiting responses to the pandemic and social unrest of 2020.

Originally founded in the 1930s as an artists’ colony, the Maitland Art Center continues its legacy through their Artists-in-Action program, which grants on-campus studio space to Central Florida-based artists each year.

Having this studio space gave Mosher a place where he could concentrate on making new works – like the one currently on display in the exhibition, titled “Ownership: Occlusions, Night Terrors, and Pernicious Doubt,” which visualizes 2020 data on U.S. gun ownership.

“In looking at the research from every town, the data suggests that ownership actually makes you less safe, so that became the central theme of the new bronze series,” Mosher said. “I should add, however, that there is very little research on gun violence in the U.S. because congress blocked funding for it for more than 20 years.” 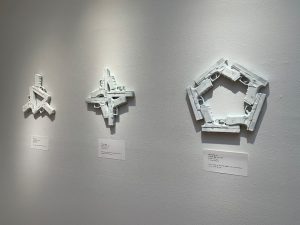 “Pernicious Doubt,” a piece composed of three Glock 17 guns in a triangular formation, visualizes the statistics that having access to a gun increases the risk of suicidal death by three times.

“Occlusions,” a piece composed of four Glock 17 guns fit together in a four-pointed formation, visualizes the statistics that carrying a gun makes you four times more likely to be killed in an aggressive encounter than without a gun.

“Night Terrors,” is also the stuff of nightmares – a piece composed of five Glock 17 guns fit together in a nod to a mandala, which visualizes the statistics that having access to a gun results in women being five times more likely to be killed in acts of domestic abuse.

“Using the gun and bullet forms as representations of these statistics gives them weight and power,” Mosher said. “I started making [pieces about gun violence] back in 2017 in response to the Pulse shooting here in Orlando, and other mass shootings around the country. It is insane that so many people are shot to death in the U.S. No other developed country in the world has this problem.”

A Glock 17 was used in his latest work due to its popularity both in pop culture and the police force. The three pieces that compose this artwork fade into the background due to the patina used and appear as delicate as the lives lost to gun violence.

Mosher is also a Fulbright scholar and was awarded the Nicholson School’s Outstanding Creative Activity Award last year, which allowed him to attend the Collaboration of Design and Arts (CODA) Worx Summit.

CODA looks specifically at digitally enhanced public sculptures, so Mosher was able to learn more about the large-scale public art process — an area he hopes to engage with more in the future.

What’s next for Mosher?

“I have yet to address firearms suicide in my work, but it is on the horizon,” said Mosher.

To find out more about his previous work, read this article. 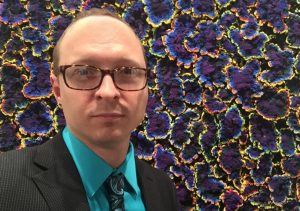 Shots are from the exhibition at A&H Museums Maitland. Photo credit: Matthew Mosher.  Additional individual images of ownership at: https://mosher.art/portfolio_entry.php?art_id=122