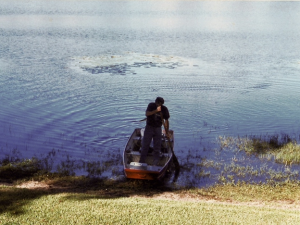 Associate Professor Robert Jones has more than 50 productions to his name as a filmmaker –and he’s not content to keep all that experience to himself.

Jones moved to Los Angeles in 1991 like so many before him with big dreams to become a famous director. At that time, Jones found himself looking for a side gig to pay the bills until the red carpet came calling. Taking this path on the journey towards his goals, he discovered yet another passion to become invested in – teaching.

“I was meant to move to Orlando and teach and do my own films on the side and it’s the best thing in the world for me,” Jones said. “I learned a lot about myself, about filmmaking and teaching.”

Jones first joined the film industry as an independent filmmaker. And now, he has been teaching for over 50 years. He taught in almost every film school in LA after living there for six years and was awarded the UCF TIP Award for outstanding teaching in 1996 when he began teaching in Florida.

The subject of his class is film analysis. By teaching students the methods and techniques Hollywood uses for narrative films, they can pick up those tools and implement them in their own film productions – or when the time is right, break the rules in creative ways.

Still making award-winning films, Jones knows his material “inside and out,” with his work acknowledged by film awards such as the Christopher Columbus Screenplay Discovery Award in 1998.

In recent years, his documentary films, “Police Story,” about a teenager assaulted by a Vero Beach cop and “Unknown Soldier,” about a sailor murdered by his shipmates have been screened in the Independent Professional Documentary Film Festival.

Jones moved to Orlando to teach film at UCF and has since continued to pass down the knowledge and experiences he gained while in LA to his students in the Film program. While he comfortably sits in an expert chair, Jones is quick to point out that learning is a two-way street.

He recalls a conversation he had with a student and how she pointed out something in a film that he never thought about before.

“Both the experience of teaching and filmmaking are something you can learn from,” Jones said. “They lead you to experiences that you are not expecting and often work out for the best. I have learned that teaching is a calling and once called you are a teacher for life. It’s great if you embrace it, and hell if you don’t.”

Originally written for COS News.