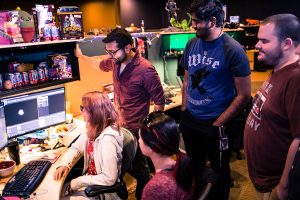 “The Princeton Review rankings reflect the high quality of our interactive game development programs at UCF,” says Robert S. Littlefield, director of the Nicholson School of Communication and Media.

This is the 10th straight year that The Florida Interactive Entertainment Academy (FIEA), UCF’s graduate game development program, has been named one of the top five programs in the world by the Princeton Review. And UCF’s undergraduate Games and Interactive Media department moved up 23 places from 2018’s ranking.

“The Princeton Review rankings reflect the high quality of our interactive game development programs at UCF,” says Littlefield. “We are very pleased that the extraordinary efforts of our faculty to provide high-quality instruction to growing numbers of students has been recognized as being among the best in the world. I look forward to even higher rankings for the programs in the future.”

Both programs will be located at UCF Downtown starting in Fall 2019. In partnership with Valencia College, the brand-new campus will bring 7,700 students to live, learn and work in downtown Orlando.

“I’m pleased that the Princeton Review has recognized UCF’s continued focus on gaming education at the undergraduate and graduate level,” says Ben Noel, executive director of FIEA. “As we continue to grow, I expect UCF Downtown to become an even greater hub for game design education and industry collaboration.”

“Our department of Games and Interactive Media offers a space for student to develop their creative voices through expressive work across platforms, ranging from video games, mobile applications and websites to virtual and augmented reality experiments,” says assistant director Anastasia Salter. “The faculty appreciate this recognition of the department’s continual efforts to provide this excellence at UCF’s impressive scale and community impact.”

Since opening its doors in 2005, FIEA has graduated 671 students. Graduates are working at more than 230 companies around the world, including Apple, DreamWorks, Electronic Arts, Blizzard, Bungie, Zynga, RockStar, Ubisoft, Disney, Microsoft and Nintendo.

The Games and Interactive Media department is part of the interdisciplinary Nicholson School of Communication and Media. The department serves more than 1,000 students and offers undergraduate specializations in Game Design and Web and Social Platforms, as well as a Master of Arts in Digital Media.

The Princeton Review chose the programs based on its 2018 survey of 150 institutions in the U.S., Canada and abroad that offer game design degree programs or courses. The 40-question survey gathered data on everything from UCF’s game design academic offerings and lab facilities to the program’s graduates’ starting salaries and career achievements. More than 40 data points in four areas (academics, faculty, technology and career) were analyzed to tally the lists.

In addition to being published today on The Princeton Review website, the listing will also be featured in the May issue of PC Gamer magazine, on newsstands March 26.

This story was previously published in UCF Today.