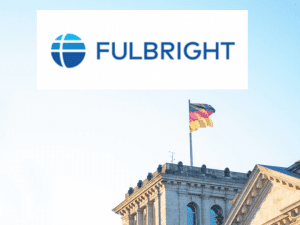 2021 marks 75 years since the Fulbright Program first commenced. Following its inception in 1946, more than 400,000 “Fulbrighters” have participated in the international educational exchange program.

At UCF, 57 Knights have participated throughout the years in the travel-abroad program and received Fulbright awards.

The Fulbright Program is devoted to increasing mutual understanding between the people of the United States and the people of other countries.

Boyd Lindsley, Ed.D, who serves as the senior associate director for the Nicholson School of Communication and Media (NSCM), has been interested in international education since he was an undergraduate student.

As a student, Lindsley applied to be an international exchange student in Australia. However, it wasn’t long after he applied that the September 11 attacks took place. Although this devastating tragedy thwarted those early plans, the Nicholson School’s Senior Associate Director knew it was something that had immense value and he would continue to devote time to.

Since then, and especially during his time with the Nicholson School, Lindsley has been involved in supporting internationalization efforts. He has been an integral part of establishing both student and faculty exchange – and study abroad – programs in several international destinations, including Germany, the U.K., Spain, the Netherlands and Sweden.

Due to these efforts, and his continued dedication to internationalization, Lindsley was notified by the Fulbright Foreign Scholarship Board that he has been selected to participate in Fulbright’s International Education Administrators (IEA) Award.

Robert Littlefield, Ph.D., founding director and professor at the Nicholson School, offered some words on Lindsley’s determination and achievement.

“Boyd is such a deserving recipient because of his interest in other cultures and his commitment to creating opportunities for students and faculty through international experiences,” said Littlefield. “I am looking forward to the ideas he will bring back to NSCM as we forge new partnerships in the coming years.”

The IEA awards are seminars designed to help U.S. international education professionals and senior higher education officials create empowering connections with their counterparts and higher education systems of other countries, which Lindsley will now have the opportunity to partake in.

Selected applicants learn about the host country’s education system as well as establish networks of U.S. and international colleagues over the course of an intensive two-week grant duration.

The four host countries for 2021 include Korea, France, Germany and Russia. Lindsley will be traveling to Germany to participate in the seminars that will include campus visits, briefings with faculty, government officials and leading educational experts as well as tours of historical and cultural sites.

“I know that simply exposing a person to an international setting is often life-changing,” said Lindsley. “From the most basic aspect of boarding a plane, to landing and figuring out how to get from point A to point B in a language that is not native to the traveler, to the robust partnerships we have established with a number of excellent international institutions – these opportunities have the chance to forever enhance a person’s life and permanently change their outlook. I am most thankful and fortunate to be able to participate in a program that will allow me to help create even more opportunities for Nicholson faculty, staff and students to participate in the coming years.”

It is anticipated that this award will result in more international partnerships and opportunities for the university.

“We are hopeful, once the travel restrictions are lifted, to expand the school’s international partnerships and to provide opportunities in Asia and Latin America for our faculty, staff and students, which many have been interested in,” said Lindsley.

Originally from Upstate New York, Lindsley moved to Florida to attend college. After completing his associate in arts from Indian River State College in Ft. Pierce, he moved to Orlando where he majored in advertising/public relations at the University of Central Florida (UCF).

Following his work in both the public relations and airline industries, he returned to UCF to complete his Master of Arts in interpersonal communication. In 2007, he was recruited by the university to support the Nicholson School. In 2015, he completed his doctorate in Executive Leadership.

In addition to Lindsley’s instructional duties for NSCM, he functions as the chief operations officer, chief financial officer and chief of staff for the Nicholson School.

Fulbright is the world’s largest and most diverse international educational exchange program. Fulbright alumni have become head of state, ambassadors, CEOs, artists, scientists and university presidents, among other professions. They include 60 Nobel Laureates, 88 Pulitzer Prize winters, 75 MacArthur Fellows and thousands of leaders across the private, public and non-profit sectors.

For more information about the program and awards, visit this page.